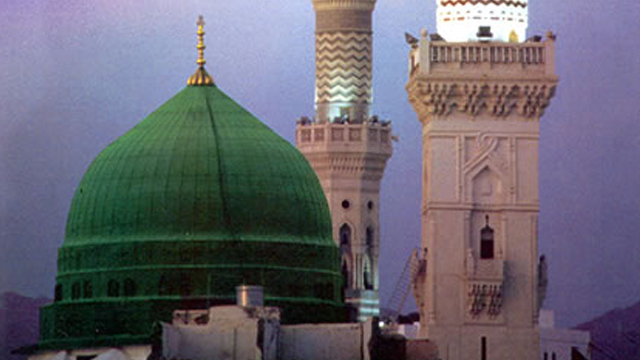 Question: How do we respond to the grave worshipers, who use as proof [for their practice] that the Prophet (sal-Allaahu ‘alayhi wa sallam) was buried inside al-Masjid an-Nabawee?

Response: The response to that is from [four] angles:

Firstly: The Masjid was not built upon the grave, rather, it was built during the life of the Prophet (sal-Allaahu ‘alayhi wa sallam).

Thirdly: The inclusion of the houses of the Messenger (sal-Allaahu ‘alayhi wa sallam), amongst them the house of ‘Aa.ishah (radhi-yAllaahu ‘anhaa) [where the Prophet was buried] within the Masjid was not done based upon the consensus of all the companions, rather, after many of them had passed away. And it was not something which the companions sanctioned. Rather, some of them opposed. From amongst those who opposed was the taabi’ee Sa’eed ibn al-Musayyib.

Fourthly: The grave was not inside the Masjid, even after it was included within it. That was because it was in a room separate from the Masjid, and the Masjid was not [actually] built upon it.

And because of this, Allaah has rendered this place protected and surrounded by three walls. [So] all the walls of this place do not face the Qiblah – because it is [in the form of] a triangle.

[Regarding] the point which is situated at the Northern side, a person praying towards it would be unable because it is oblique [in shape].

[So] based upon [all of] this, any attempts by the people of the grave to justify [their practice] are [clearly] invalidated.