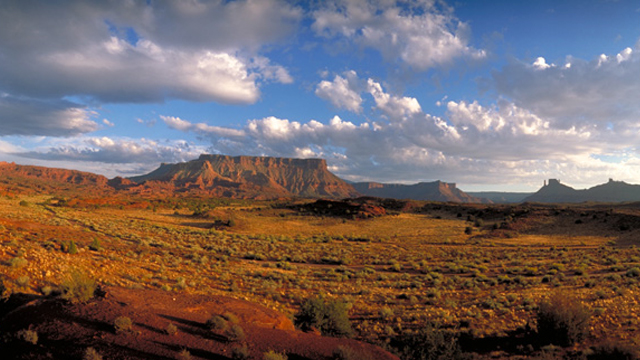 He is the Noble Shaykh, the Scholar of Hadeeth Rabee’ Ibn Haadee ‘Umayr al-Madkhalee. He comes from the well-known tribe of al-Madaakhalah from the province of Jaazaan to the south of Saudi Arabia. It is one of the tribes of Banee Shabeel, and Shabeel was the son of Yashjub Ibn Qahtaan.

He was born in the village of al-Jaraadiyah, which is a small village to the west of the town of Saamitah at a distance of three kilometers. He was born in 1352 A.H./1931 C.E., and his father died approximately a year and a half after his birth. So his mother (rahima-hallaah) brought him up. She supervised him and gave him the best of upbringings, teaching him praiseworthy manners of truth and trustworthiness.

When he reached the age of eight years, he joined the circles of knowledge in his village and learnt to read and write. And from those under whom he studied were Shaykh Shaybaan al-‘Areeshee and also al-Qaadhee Muhammad Ibn Muhammad Jaabir al-Madkhalee, and also Muhammad Ibn Hussayn Makkee from the town of Sibyaa. He studied the Qur.aan with Shaykh Muhammad Ibn Muhammad Jaabir al-Madkhalee, as he also studied with him tawheed and tajweed. He later studied at the Madrasah in Saamitah. And from those under whom he studied were: Shaykh Naasir Khaloofah Tayaash Mubaarakee (rahima-hullaah), the well-renowned scholar from the major students of Shaykh al-Qar’aawee. Under him, he studied Buloogh al-Maraam wa Nuzhatu an-Nadthar of al-Haafith Ibn Hajar (rahima-hullaah) then he joined the educational institute in Saamitah and there studied under esteemed scholars, the most renowned of them was Shaykh Haafith Ibn Ahmad al-Hakamee (rahima-hullaah) and also his brother, Shaykh Muhammad Ibn Ahmad al-Hakamee. He also studied under the Noble Shaykh and Scholar of hadeeth Ahmad Ibn Yahyaa an-Najmee (hafidha-hullaah), and also studied ‘aqeedah under the Noble Shaykh Dr. Muhammad Amaan Ibn ‘Alee al-Jaamee (rahima-hullaah). He also studied fiqh (Zaad al-Mustaqni’) under Shaykh Muhammad Sagheer Khamees and many others under whom he studied Arabic language and poetry. In 1380 A.H./1960 C.E. he graduated from the educational institute in Saamitah and in 1381 A.H./1961 C.E. he joined the Faculty of Sharee’ah in Riyaadh and continued there for a period of a month or two, then the Islaamic University of Madeenah opened and he transferred to Madeenah and joined the Faculty of Sharee’ah and studied there for four years and graduated in the year 1384 A.H./1964 C.E. with excellence.

From those under whom he studied whilst at the Islaamic University of Madeenah were:

After he graduated, he worked as a teacher in the Islaamic University for a while, then he joined the Department for Higher Studies at Umm al-Quraa University in Makkah where he continued his studies attaining a masters degree in hadeeth in 1397 A.H./1977 C.E.. In the year 1400 A.H./1980 C.E. he attained a doctorate from Umm al-Quraa University, also with excellence.

He then returned to the Islaamic University as a teacher at the Faculty if Hadeeth. He taught hadeeth in all it’s forms and sciences and became the head of the Department of the Sunnah at the Department for Higher Studies a number of times at the rank of chairman.

The Shaykh (hafitha-hullaah) excels in much humility with his brothers, students, and visitors. He is humble in his housing, dress and transportation; he does not seek nor like luxury in any of these.

He is also always cheerful and open, with boredom not striking any of his sittings. His sittings are filled with readings of hadeeth and the Sunnah and warnings against innovations and their perpetrators, such that one who sees him and does not know him feels nothing more concerns him than this. The Shaykh loves the students of knowledge and honours them and gives to them in charity and seeks to have their needs met to the best of his ability both physically and financially.

His house is always open to the students of knowledge such that no day passes whereby he tucks into his breakfast, lunch or evening meal by himself, and his students call upon him.

The Shaykh has written many books, and all praise is for Allaah, as he has frequently broached many subjects which required attention, particularly the issue of refuting the perpetrators of innovations and desires in our time. Amongst his numerous books is that entitled: “The Methodology of the Prophets in calling to Allaah – that is the way of wisdom and intelligence” which is available in the English language.

Amongst the many scholars who have praised the Shaykh are:
Shaykh Muhammad Naasiruddeen al-Albaanee (rahima-hullaah) who mentioned on the tape “Liqaa. Abee al-Hasan al-Ma.rabee ma’a al-Albaanee” about him and Shaykh Muqbil Ibn Haadee al-Waadi’ee: “Without a doubt we praise Allaah the Almighty Who has, for this pure and upright da’wah to the Qur.aan and the Sunnah upon the methodology of the Pious Predecessors, made use of numerous callers from different Islaamic lands who uphold the collective obligation which very few do so in the Islaamic world today, notably the two Shaykhs (Rabee and Muqbil), the callers to the Qur.aan and the Sunnah and that which the Pious Predecessors were upon and wagiing war against those who oppose this correct methodology…”

He also mentions on the tape “al-Mawaazanaat Bid’atul-‘Asr”: “And in short, I say that the one who carries the banner of al-Jarh wat-Ta’deel in this present day and age in truth is our brother (Shaykh) Dr. Rabee, and those who refute him do not refute him upon (sound) knowledge – never…”

Shaykh ‘Abdul-‘Azeez Ibn ‘Abdullaah Ibn Baaz (rahima-hullaah) who mentioned on the tape “Tawdeeh lil-Bayaan” about him: “So the explanation which has been issued by us, it’s intention was the call of all, all the callers and the scholars to the constructive criticism…and the intention was not our brothers the people of Madeenah from the students of knowledge and the teachers and the callers, and nor was the intention other than them in Makkah or Riyaadh or in Jeddah. Rather our general intention was our brothers the well-known Shaykhs in Madeenah of whom there is no doubt, they are the people of sound ‘aqeedah and from the Ahlus-Sunnah wal-Jamaa’ah, such as: Shaykh Muhammad Amaan Ibn ‘Alee, Shaykh Rabee’ Ibn Haadee, Shaykh Saalih Ibn Sa’d as-Suhaymee, Shaykh Faalih Ibn Naafi’, Shaykh Muhammad Ibn Haadee – all of them are known to us in uprightness and knowledge and sound ‘aqeedah…”

He also mentions on the tape: “al-As.ilah as-Suwaydiyah”: “Indeed Shaykh Rabee’ is from amongst the scholars of the Sunnah”.

Shaykh Ibn Baaz also permitted Shaykh Rabee’ to teach in his masjid (Masjid Ibn Baaz) in Makkah. His lessons still continue to this day, and this is evidence enough that the Shaykh died and he was pleased with Shaykh Rabee’ and that which he was upon in creed and methodology.

Shaykh Muhammad Ibn Saalih al-‘Uthaymeen on the tape “al-As.ilah as-Suwaydiyah” said: “…as for Shaykh Rabee, then regarding him, I do not know anything but good, and the man is an upholder of the Sunnah and an upholder of Hadeeth”

He was asked on the tape “Kasf al-Lathaam ‘an Mukhaalif Ahmad Salaam”: “What is your advice for the one who forbids (listening to) the tapes of Shaykh Rabee’ Ibn Haadee with the claim that they stir up fitnah and within them is praise for the rulers in the Kingdom and that his praise, i.e. Shaykh Rabee’s praise for the rule, is hypocrisy?” The Shaykh responded: “Our opinion is that this is incorrect and is a major error, and Shaykh Rabee’ is from amongst the scholars of the Sunnah and the people of good and his ‘aqeedah is sound and his manhaj is correct…”

Shaykh Dr. Saalih Ibn Fowzaan Ibn ‘Abdullaah Ibn Fowzaan on the tape “al-As.ilah as-Suwaydiyah”, after mentioning Shaykh Rabee’ along with a number of other scholars he said: “…and they are from amongst the distinguished scholars who have much experience in da’wah and refutation against those who desire to take the path of the da’wah outside it’s correct path, so it is obligatory to circulate their tapes because indeed in them there is great benefit for the Muslims”

Shaykh Muhammad Ibn Subayyal (General President of the Affairs of al-Masjid al-Haraam (Makkah) and al-Masjid an-Nabawee (Madeenah), and the Imaam and Khateeb of al-Masjid al-Haraam) was asked about his opinion regarding whoever forbids (listening to) the tapes of the well-known scholars of Ahlus-Sunnah such as Shaykh Muhammad Amaan al-Jaamee (rahima-hullaah) and Shaykh Rabee’ Ibn Haadee al-Madkhalee (hafitha-hullaah), whereby he says that tapes of the Shaykh stir up fitnah. So the Shaykh responded: “Look! These two scholars (their tapes) are amongst the best tapes, they call to the Sunnah and holding firm to the Sunnah, however, none speaks about them (in this manner) except one who follows his desires, and those who speak most about them are the people of partisanship who associate themselves with a group from amongst the groups, they are the ones who forbid these things. As for these two scholars well-known for their holding form to the Sunnah and their sound ‘aqeedah upon the methodology of the Pious Predecessors, then they are amongst the best of people.”