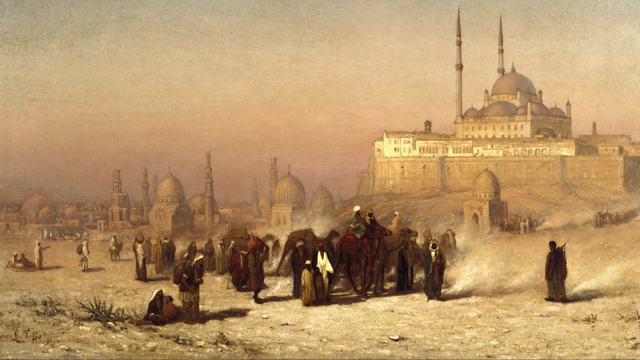 I accompanied the Shaykh [from ‘Unayzah] to al-Badaa.i’ – which was a distance of 15 kilometres from ‘Unayzah – for a lunch invitation.

After lunch, on our return home we noticed a man with a red beard [possibly dyed with henna], and a peaceful look about him waving his hand. The Shaykh said:

So the Shaykh said to him:

He said: “Take me with you to ‘Unayzah.”

So the Shaykh said to him:

First, that you do not smoke, and second, you increase in the remembrance of Allaah.”

The man responded: “As for smoking, then I do not smoke, however, I was a passenger with a man who smoked and [because of this] I asked him to drop me off [here], and as for the remembrance of Allaah, there is no Muslim except that he remembers Allaah.”

So the man got in the car.

[It was apparent throughout the journey that] the man was not aware he was in the company of Shaykh Ibn ‘Uthaymeen. So when they arrived at ‘Unayzah, the man said:

“Direct me to the house of Shaykh Ibn ‘Uthaymeen, [as I have a question I need to ask him].”

So the Shaykh said to him: “Why did you not ask him when you met him in al-Badaa.i’?”

The Shaykh said: “I saw you with my own eyes talking to him and greeting him.”

So the man said: “You are making fun of a man who is older than your father!”

The Shaykh smiled and said to him: “Pray the ‘Asr prayer at this [masjid] Jaami’ (Jaami’ ‘Unayzah) and you shall see him.”

The man then left without knowing he had been talking to Shaykh Ibn ‘Uthaymeen himself.

After he finished praying the ‘Asr prayer, he saw the Shaykh in front having led the congregation in prayer. So he asked about him, and was informed that he is the Shaykh. So he approached the Shaykh and excused himself that he had not known (recognised) him [earlier], then asked his question. The Shaykh answered his question, and the man began to cry, supplicating for the Shaykh.