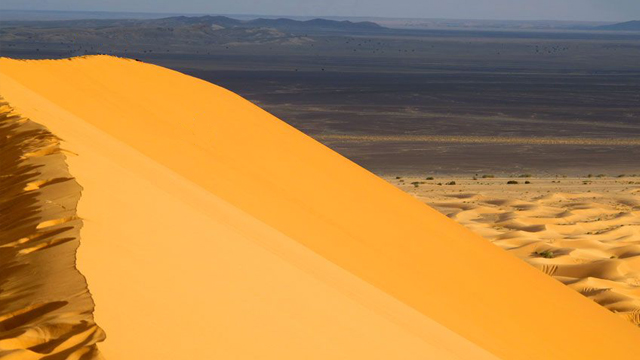 His Birth and Early Childhood
Shaykh Haafidth ibn Ahmad ibn ‘Alee al-Hakamee (rahima-hullaah) was one of the notable scholars from the Kingdom of Saudi Arabia, and one of the most famous of those who lived in the 14th (hijree) century to come from the southern region of the country (i.e. Tuhaamah).

Shaykh Haafidth was born on the 24th of Ramadhaan, 1342 A.H. (1924 C.E.) in a coastal village called as-Salaam which lies just southeast of the city of Jaazaan. When he was still just a small boy he moved to the city of al-Jaadi’ which is close to the city of Saamitah because his father found that farmland and pastures were better there. However, his immediate family continued to commute between the two cities due to extenuating circumstances.

The young Haafidth was raised under the good and righteous guardianship of his father who taught him modesty, purity and good character. Before reaching the age of maturity, he worked as a shepherd herding his fathers’ sheep, which were the most important form of wealth to his family as well as the rest of the people in the society in those days. However, Haafidth differed from the other boys in his village because of his intelligence and his ability to memorise and understand quickly. He learned to write while he was still a small boy and he memorised the entire Qur.aan by the time he was twelve years old.

Seeking Knowledge and Religious Studies
When the young Haafidth reached the age of seven years, his father put both him and his older brother Muhammad [He is now one of the well respected scholars in the southern part of the Kingdom of Saudi Arabia. His efforts in Da’wah and Islaamic teaching have had a tangible effect on the entire region. He has been the head of the Islaamic Institute in Saamitah for the last 20 years. He assumed the position after his brother – who was the first head of the institute – left the position. I ask Allaah to extend his life, and grant him good health, and make success always his ally, and that the Muslims continue to benefit from him. Ameen] into Qur.aan memorisation school in the city of al-Jaadi’. There he read juz Amma and juz Tabaarak (30th and 29th parts of the Qur.aan) to the teacher and afterwards he and his brother finished learning to read the entire Qur.aan with the proper rules of recitation in just a few months and shortly thereafter he completed memorising the Qur.aan in its entirety.

Next he concentrated on his writing skills until he perfected them and was able to copy the Qur.aan with excellent handwriting. At the same time he and his brother were busy reading and memorising books of fiqh, inheritance law, hadeeth, tafseer, and tawheed under the tutelage of their father since there was no one else suitable or trustworthy enough to teach them.

In the year 1358H (1940) Shaykh ‘Abdullaah ibn Muhammad ibn Hamad al-Qar’aawee [Shaykh ‘Abdullaah al-Qar’aawee was born in the year 1315 A.H. in the city of ‘Unayzah in the area of al-Qaseem and he died in the year 1389 A.H. in the city of Riyadh (rahima-hullaah). Great credit goes to him for the growth and development of knowledge and literature in the southern region of the Kingdom of Saudi Arabia (Tuhaamah and ‘Aseer). There were many positive results and great improvements in the religion, society, and culture of that area and its youth due to his call to Da’wah at-Tawheed] travelled all the way from Najd to the city of Tuhaamah in the southern part of the Kingdom after he heard about the level of ignorance and the spread of innovation in the region – which (eventually) becomes the condition of every area that has only a few people calling to Allaah’s religion (Islaam) or no one at all to set the affairs straight. Shaykh al-Qar’aawee vowed to shoulder the responsibility of calling to the True Religion (of Islaam) and correcting the corrupt beliefs in aqeedah and the superstitions that were stuck in the minds of the ignorant people in the region.

In 1359H (1941) Haafidth ibn Ahmad’s older brother Muhammad went to Shaykh Hamad al-Qar’aawee with a letter from the both of them requesting some books on Tawheed and expressing their regret at being unable to come (and study with him) because they were busy serving and seeing to their parents needs. They also requested that the Shaykh visit their village so that they might listen to some of his lessons. Shaykh al-Qar’aawee accepted their invitation and went to their village where he met the young Haafidth and got to know him very well and saw in him promising signs of excellence and intelligence – which turned out to be a very accurate evaluation.

Shaykh al-Qar’aawee remained in al-Jaadi’ (their village) a number of days teaching, and a group of elders as well as some youth from the local people attended the lectures. Amongst them was the young Haafidth who was the smallest of them in age, yet the fastest of them in memorising and understanding the information given. Shaykh ‘Abdullaah al-Qar’aawee said about him: “And thus it was that I stayed a number of days in al-Jaadi’. Haafidth attended the lessons and if he missed anything then he would get it from his classmates. He is like his name Haafidth (which means: one who memorises), he preserves things (accurately) by heart as well as with his note taking. I used to dictate to all of the students and then explain the lesson and the older students used to ask him if they had trouble understanding something or (if they missed) writing something in their notes.” [This quote was taken from a short autobiography of the life of Shaykh al-Qar’aawee.]

When Shaykh al-Qar’aawee was ready to return to the city of Saamitah – which by this time he had already made his dwelling place and the center for his da’wah activities – he asked the young Haafidth’s parents to permit him to employ someone to herd their sheep on Haafidth’s behalf in exchange for their permission that Haafidth and his older brother return with him to Saamitah so that they might seek knowledge there underneath his tutilage. But Haafidth’s parents refused the Shaykh’s request at first, insisting that their youngest son remain with them because of their great need for him. However, Allaah decreed that the life of Haafidth’s mother would end during the month of Rajab in the year 1360H (1942), so Haafidth’s father then allowed him and his brother Muhammad to study with the Shaykh two or three days a week and then return to him.

Haafidth began to study in Saamitah with the Shaykh who would dictate lessons to him after which he would return to his village. Haafidth was an inspired student who understood and memorised everything that he read or heard.

Sadly his father did not live long after that as he died on his way back from Hajj in the same year 1360 A.H. (1942 C.E.). After that, Haafidth was able to study and gain knowledge (full time) so he went to his Shaykh and stayed with him, always learning and benefiting from him. Haafidth proved to be an exceptionally gifted student who learned very quickly. He was also very good at poetry and prose and he (eventually) authored many books in the major categories of Islaamic knowledge.

When Haafidth was only nineteen years old, Shaykh al-Qar’aawee asked him to write a book about Tawheed and the ‘aqeedah of the Pious Predecessors, that would be easy for students to memorise, and that would also demonstrate just how much he has benefited from his reading and studying. The young Haafidth responded by writing a treatise in didactic prose entitled: ((Sullam-ul-Wusool ilaa ‘Ilm-il-Usool fee at-Tawheed)) which he completed in the year 1362 A.H. (1944 C.E.), and which met with the avid approval of his teacher as well as the other prominent scholars of his time.

He followed this work with other writings also in didactic prose on tawheed, hadeeth terminology, fiqh, principles of fiqh, inheritance law, seerah of the Prophet, and others, all of which were originally published with the help of King Saud ibn ‘Abdul-‘Azeez.

It becomes clear for us through what Shaykh Haafidth al-Hakamee left behind for us from his writings that he was profoundly affected by reading books that were written by the scholars of the early generation of Muslims about tafseer, hadeeth, fiqh, and principles of fiqh, Islaamic manners, Arabic language and grammar. As regards ‘aqeedah, he was obviously very influenced by the writings of Shaykh al-Islaam Ibn Taymiyyah and his famous student Ibn-al-Qayyim.

Some of His Other Achievements
When Shaykh ‘Abdullaah al-Qar’aawee realised the superiority of his student Haafidth, he appointed him as a teacher for the other students and they benefited greatly from his lessons.

In 1363 A.H. (1945 C.E.) Shaykh al-Qar’aawee selected Haafidth to be the director of a school in Saamitah, which was the first and the largest of all of the schools that Shaykh al-Qar’aawee established for the students of knowledge in the southern region the kingdom. Haafidth was also made regional superintendent for all of the schools in the neighbouring villages and townships.

Shaykh al-Qar’aawee went on to enlarge the schools in Tuhaamah and ‘Aseer and he eventually established at least one school in every village in the south that taught Islaamic studies. He appointed his students as teachers and administrators for these schools however, when Shaykh al-Qar’aawee had established literally hundreds of schools in the southern region he took his first student, Haafidth al-Hakamee, as his assistant whilst travelling and supervising the schools.

Shaykh Haafidth travelled to many places in order to fulfill his responsibilities with Shaykh al-Qar’aawee including as-Salaamah al-‘Ulyaa and the city of Beesh, Umm al-Khashab in northern Jaazaan. Afterwards, he returned to Saamitah again as director of the schools in the region in order to help his Shaykh administer the many schools that he had established so that the important improvements brought about by this da’wah might continue.

Most of Shaykh Haafidth al-Hakamee’s time was spent trying to uplift the youth in his area and benefit them with his knowledge as much as he could. Some of his students are now renowned scholars in their own right having taken positions as judges, teachers, and preachers everywhere in the southern region of the kingdom and elsewhere.

In 1373 A.H. (1955 C.E.) a high school was opened in Jaazaan, the capital city of the southern region, and Shaykh Haafidth al-Hakamee was chosen to be its first director in the same year. Then in 1374 A.H. (1956 C.E.) a scholastic institute was opened in Saamitah by the General Directorate of Colleges and Institutes and Shaykh Haafidth al-Hakamee was chosen to be its director as well. Shaykh Haafidth performed his administrative duties extremely well in addition to teaching some classes where he was known to give the students knowledge above and beyond the limited curriculum of the institute either himself or through some of the other in the institute.

His Death
Shaykh Haafidth al-Hakamee remained as the director of the scholastic institute in Saamitah until he performed Hajj in the year 1377 A.H. (1958 C.E.). After completing the rights of Hajj, Shaykh Haafidth died in the city of Makkah from a sudden illness on the 18th of Dhul Hijjah, 1377 A.H. (1958 C.E.) while he was still a young man of only 35 years. May Allaah, the Exalted, have mercy upon him.