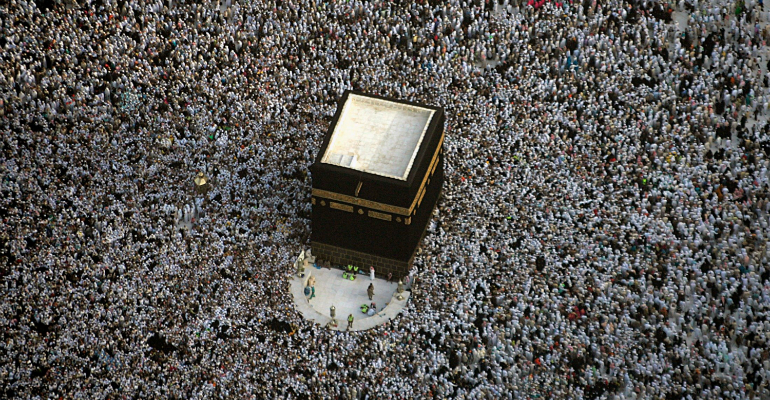 Voices of support for Saudi Arabia as well as worldwide condemnation of the botched terrorist attack targeting worshipers in the Grand Mosque in Makkah have started pouring in as soon as the plot was exposed Friday.

Six foreigners were wounded when a suicide bomber blew himself up near the Grand Mosque, where hundreds of thousands of worshipers had gathered for prayers on the last Friday of the fasting month of Ramadan. The suicide bomber, who was hiding in a house in the Ajyad neighborhood, opened fire on security forces refusing to comply with calls to turn himself in. He later blew himself up after security forces closed in on him.

The Interior Ministry said a wider plot had been foiled with the arrest of five suspects earlier in the day. It said the operation was planned by three terrorist groups, two based in Makkah and the third in Jeddah.

The Kuwaiti emir lauded the Kingdom’s role in combating terrorism and the vigilance of its security forces in thwarting this despicable scheme.

In a press statement, the source described the plot as a blatant aggression against Muslim sanctities and a provocation to Muslim feelings.

The source affirmed Kuwait’s support to all measures taken by the Kingdom to maintain its security and stability.

The Organization of Islamic Cooperation (OIC) has strongly condemned the terrorist plot to target the Grand Mosque in Makkah.

OIC Secretary-General Dr. Yousef Al-Othaimeen commended the alertness of the Saudi security men who foiled and countered this terrorist operation. He said those who planned and supported the operation were implementing a sinister plan that sought to undermine security and stability in the Kingdom.

Al-Othaimeen added that no true Muslim would violate the sacredness of the holy mosque, particularly during the blessed month of Ramadan.

Al-Othaimeen expressed his confidence in the ability of the relevant Saudi authorities to apprehend the culprits, bring them to justice and expose their affiliations and sponsors.

Muslim World League Secretary General Sheikh Mohammed bin Abdul Karim Al-Issa condemned the attempted attack and said that terrorism presented a horrific face to those who are deluded in attributing their hostile acts to Islam.

Crown Prince Muhammad Bin Salman, deputy premier and minister of defense, received a telephone call from Sheikh of Al-Azhar Dr. Ahmed Al-Tayeb, expressing Al-Azhar’s condemnation of the failed terrorist attack that targeted the Grand Holy Mosque in Makkah on Friday, stressing Al-Azhar’s support for Saudi Arabia in combating terrorism and confronting it until it is eradicated and uprooted.

For his part, the Crown Prince expressed Saudi Arabia’s appreciation to Al-Azhar and its important role in clarifying the truths of Islam and the dissemination of religion, especially in this delicate stage being experienced by the Arab and Islamic nation

The Crown Prince pointed out that the Islamic nation is counting greatly on the role of religious institutions in the coming stage and praised the efforts led by Sheikh Al-Azhar in confronting the extremist ideology and terrorist groups.

Earlier, Egyptian Foreign Ministry confirmed in a statement that the government and people of Egypt stand by Saudi Arabia in confronting any attempt to target its security and stability.

He emphasized that the UAE backs and stands in full solidarity with the Kingdom of Saudi Arabia under the leadership of King Salman.

“This heinous crime exposes the extent of terrorism and the savagery of those terrorist groups, and no one in their right mind can justify or explain it,” Sheikh Abdullah stated.

Hailing the vigilance and efficiency of the Saudi security services that nipped this heinous crime in the bud before its evil could reach the Grand Mosque, he said every Muslim in the world praises what the Kingdom, led by the Custodian of the Two Holy Mosques, was doing to serve Islam and Muslims and spread love and tolerance among all peoples of the world.

“This heinous crime will make us even more formidable and determined to eliminate terrorism and eradicate its sources along with all those who finance, incite, sympathize with, or justify it in any manner whatsoever,” Sheikh Abdullah said.

Bahrain condemned the vicious plot to target the security of the Grand Mosque as well as its worshiers.

Bahrain, in a statement, expressed its sincere appreciation of the great role of the Kingdom under the leadership of King Salman in ensuring the comfort and tranquility for pilgrims. It also lauded the outstanding efforts of the security men in thwarting the cowardly plot.

Bahrain said that it also fully supports all the actions and measures by the Kingdom of Saudi Arabia to eliminate terrorist organizations.

It reiterated its firm position in rejecting terrorism and stressed the need for closer international cooperation to eliminate the scourge that threatens all nations and peoples without discrimination.

Iraq condemned the failed terrorist attempt and affirmed its solidarity with the Kingdom Saudi Arabia in confronting terrorist groups that target its security and stability.

“These attempts demonstrate the extent of the intellectual and ideological deviation of the terrorist-based gangs, which led them to try to attack the holiest mosque during the holy month of Ramadan,” Foreign Ministry spokesman Ahmad Jamal said in a press statement.

Yemen condemned attempts to target the Grand Mosque in Makkah by a terrorist cell.

The Yemeni Foreign Ministry said in a statement: “Attempts to target the Grand Mosque by terrorist groups confirm that these groups have crossed the red lines and reflect the seriousness of their schemes, which do not hesitate to target the holiest places of Islam.”

Jordanian Minister of State for Media Affairs and Communications Mohammed Momani condemned the failed attack and expressed his country’s support for the Kingdom in its fight against terrorism.

Momani, who is also the government spokesperson, reiterated Jordan’s call for united international efforts to fight terrorists and terror organizations.

Dr. Abdullah Bin Muhammad Al-Asheikh, chairman of the Shoura Council, condemned the criminal plot targeting worshipers in the holiest place on the globe on one of the most virtuous nights in the holy month of Ramadan.

In a statement to the press, Al-Asheikh denounced the heinous deviation by these terrorists and their criminal plans. “This calls on all Muslims, east and west, to counter this clear falsehood which is not approved by any reasonable and pious person,” he said.

He called on federations of regional and international parliaments to lay down firm regulations and decisions aimed at drying up the sources of funds for terrorists.

Saudi Arabia’s Council of Senior Scholars lauded the efforts and accomplishments that led to the security men’s success in thwarting a terrorist attack on the verge of being carried out.