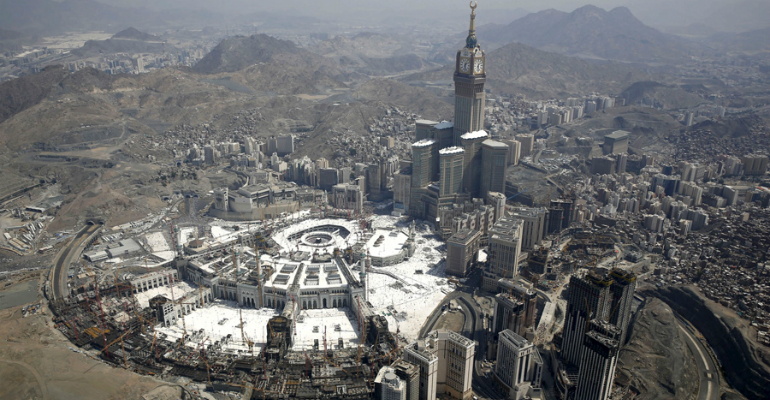 Leaders from around the Arab world have condemned a terror plot targeting the Grand Mosque in Makkah, which Saudi security forces said on Friday they had thwarted.

The UAE’s Minister of Foreign Affairs and International Cooperation Sheikh Abdullah bin Zayed Al-Nahyan also condemned the plot to target the Grand Mosque. “This heinous crime exposes the extent of terrorism and the savagery of those terrorist groups, and no one in their right mind can justify or explain it… this heinous crime will make us even more formidable and determined to eliminate terrorism and eradicate its sources along with all those who finance, incite, sympathize with, or justify it in any manner whatsoever,” Sheikh Abdullah said.

Palestinian President Mahmoud Abbas condemned the attack and expressed his full solidarity with Saudi Arabia in confronting terrorism and extremism.

The Egyptian Foreign Ministry confirmed in a statement that the government and people of Egypt stand by Saudi Arabia in confronting any attempt to target its security and stability.

Bahrain condemned the plot in the strongest terms and stressed that terrorism is contrary to all religious, moral and humanitarian values. It reiterated its firm position in rejecting terrorism, and stressed the need for closer international cooperation to eliminate the phenomenon that threatens all nations and peoples without discrimination.

Iraq also condemned the failed terrorist attempt to target the Grand Mosque, affirming its solidarity with the Kingdom in confronting terrorist groups that target its security and stability.

“These attempts demonstrate the extent of the intellectual and ideological deviation of the terrorist-based gangs, which led them to try to attack the holiest mosque during the holy month of Ramadan,” Ahmad Jamal, Foreign Ministry spokesman, said in a press statement.

The Yemeni Foreign Ministry said in a statement issued by the Yemeni news agency, “Attempts to target the Grand Mosque by terrorist groups confirm that these groups have crossed red lines and reflect the seriousness of their schemes, which do not hesitate to target the holiest places of Islam.”

Jordanian Minister of State for Media Affairs and Communications Mohammed Momani condemned the failed attack and expressed Jordan’s support for Saudi Arabia in its fight against terrorism.

Tunisia’s Ministry of Foreign Affairs said it was categorically opposed to any form of terrorism and radicalism and expressed its solidarity with Saudi Arabia.

Lebanese Prime Minister Saad Hariri said in a statement, “I vigorously condemn the terrorist attack that targeted the Grand Mosque in Makkah, which plotted for committing one of the most heinous crimes against Islam and Muslims.”

Hariri commended the swift action of Saudi Arabia’s security forces in thwarting the attempt against the Grand Mosque and pilgrims.

The Sudanese Ministry of Foreign Affairs expressed its strong condemnation and denouncement of the terror plot.

The Secretary-General of the Organization of Islamic Cooperation (OIC) condemned the terror attempt, voicing the OIC’s full support for the Kingdom in fighting terrorism.

In Riyadh, the Council of Senior Scholars said it appreciated the achievement of the security forces in thwarting the terror plot.

The council said that those who were planning the crime had not respected the sanctity of the Grand Mosque, and therefore they have no religion nor honesty.

The General President of the Affairs of the Two Holy Mosques Sheikh Abdulrahman Al-Sudais lauded the achievement attained by the Ministry of Interior in protecting the holy sites.

Egypt’s Mufti Shawki Allam lashed out those who were attempting to carry out the attack during the holy fasting month of Ramadan. He also lauded the vigilance of the Saudi security forces, which foiled the attempt.