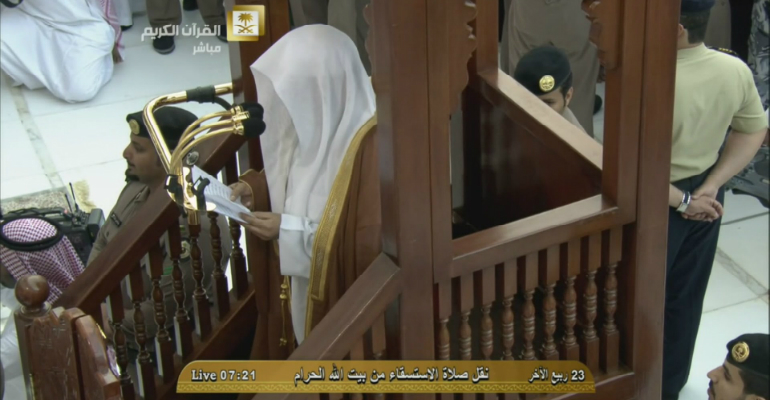 Millions of Muslim faithful braved sizzling sun and sultry weather on Friday to offer noon prayers in the Two Holy Mosques in Makkah and Madinah as authorities took all steps to provide ease and comfort to them in what could be the last Friday of the holy month of Ramadan this year.

In their sermons, the imams urged Muslims to make the best use of the remaining days of Ramadan to compensate for what they have missed till now.

They said Muslims still have a chance to compensate for wasting the first two thirds of Ramadan, Saudi Press Agency quoted the imams as saying.

The imams also urged Muslims to give Zakat Al-Fitr toward the end of the month.

Sheikh Abdulrahman Al-Sudais, imam and khateeb of the Grand Mosque, stressed that during the last ten days of Ramadan a Muslim must recall the noble deeds he has missed. He said there was still a chance for those who have wasted the first two thirds of Ramadan.

According to the guidance of the Prophet (peace be upon him), a Muslim must work harder in doing good deeds during the last ten days of Ramadan than at any other time of the year.

Al-Sudais called on writers, columnists and journalists to formulate a professional code of ethics to protect Islamic principles, values and virtues and repulse the vitriolic and malicious campaigns against Muslims and their peaceful religion.

Islam, he said, is the religion of moderation and combats extremism and terrorism. “Terror acts are not linked to any religion, culture or nation,” he said.

Al-Sudais exhorted the faithful not to fail in paying up Zakat Al-Fitr before Eid prayers as this charity compensates for the human lapses during the month of fasting.

He urged Muslims not to incline toward life of this world when they have tasted the sweetness of obedience and submission to Allah Almighty. Whoever inclines toward life in this world, will get ruined, he said adding that persevering and continuing on the path of Allah and staying right are signs of acceptance of one’s good deeds.

In his sermon at the Prophet’s Mosque in Madinah, Sheikh Ali Abdulrahman Al-Hudhaifi said Muslims can have true happiness through introspection and working hard in doing good deeds so as to increase the rewards from Allah Almighty and keeping away from sins.

He said loss and despair is in following one’s whims, giving up doing good deeds and indulging in deeds that nullify a person’s righteous deeds.

Al-Hudhaifi said: “Reciting the Holy Qur’an in the holy month of Ramadan has a strong impact on one’s soul; guides it to all good and keeps it away from all evil.”

Al-Hudhaifi stressed: “None can reform the Muslims and improve their conditions without adhering to the Holy Qur’an and the Prophet’s Sunnah. If all wise men of the world come together to solve a worldly problem, they will not be able to find a solution unless they refer and revert to the Holy Qur’an.”

All the courtyards, floors and plazas of the Grand Mosque and the Prophet’s Mosque were full to the capacity.

Security arrangements at the Two Holy Mosques was exemplary. The crowd movement in and out of the mosques was smooth and properly organized.