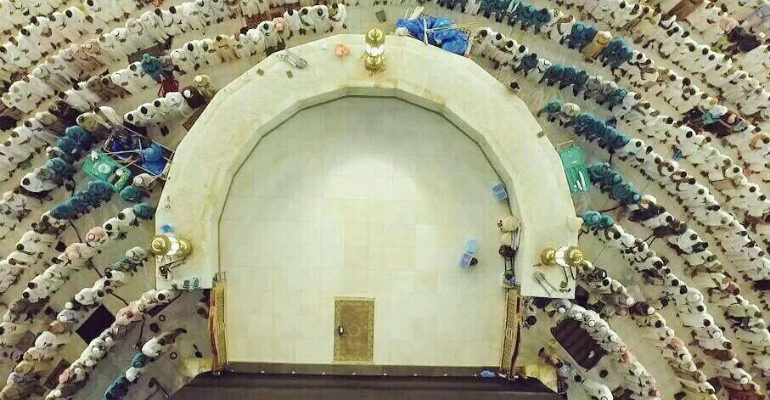 Question: A year ago, I performed ‘umrah, and during the seventh circuit [of the Ka’bah] I entered al-Hijr[1]. [After completing that circuit, and the ‘umrah], I then returned [home] to Riyadh, and thereafter I had sexual relations with my wife. So what am I [now] required to do?

Response: You have spoilt your ‘umrah because you did not complete it. You also engaged in sexual relations without completing the ‘umrah – and as such you have spoilt your ‘umrah. If you were to return [to Makkah] and performed another ‘umrah, then that would take the place of the one you had spoilt; in addition, you are [now] required to make fidyah[2] (ransom).

Translator’s note:
[1] The semi-circle walled area beside the Ka’bah, popularly referred to as Hijr Ismaa’eel.
[2] He has the choice between:
a) sacrificing a sheep – to be distributed among the poor of Makkah, or
b) feeding six poor persons – giving each poor person half a saa’ of wheat or other staple food, or
c) fasting for three days.

…this is because Allaah (‘Azza wa Jall) says:

{And do not shave your heads until the sacrificial animal has reached its place of slaughter. And whoever among you is ill or has an ailment of the head [making shaving necessary must offer] a ransom of fasting [three days] or charity [by feeding six poor persons] or sacrifice [one sheep]} – soorah al-Baqarah, aayah 196