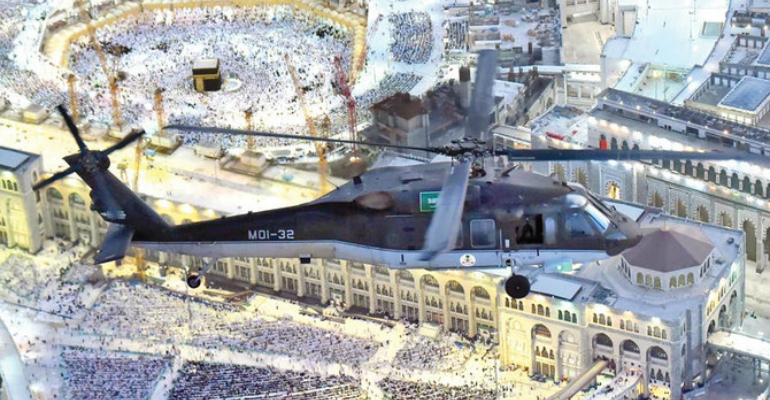 As part of its role with Umrah security forces, the General Security Aviation Command has raised its level of readiness and increased its aerial monitoring operations in Makkah for the last 10 days of Ramadan.

The command conducts aerial monitoring missions, observes traffic on the city’s main roads, provides logistic support to all government security sectors, and stands ready to carry out rescue and evacuation missions by air.

It is increasing its efforts to cope with the rising number of pilgrims as Ramadan comes to a close.

The last 10 days of Ramadan must be spent with the “utmost diligence,” the Saudi Press Agency reported the head of the General Presidency for the Affairs of the Two Holy Mosques as saying.

Dr. Abdulrahman Al-Sudais was giving a speech to the presidency’s officials, urging them to use the rest of the holy month to pray and to serve the pilgrims performing Umrah.

“These 10 holy days must be spent with the utmost diligence. It is an opportunity to stay far away from the flames of hell. The Prophet Muhammad (pbuh) was most diligent during these blessed days, even more than on the night of prayer. All of us are dedicated to serving the worshipers who are visiting for Umrah and praying at the Grand Mosque of Makkah.” Serving the pilgrims was an honor for Saudi Arabia, he added.

King Salman has called for the convening of two summits of Gulf and Arab states to be held on May 30 in Makkah.

According to a Ministry of Foreign Affairs statement carried by SPA, the king sent an invitation to the leaders of the Gulf Cooperation Council countries and leaders of other Arab countries to discuss the recent attacks by the Iranian-backed Houthis in the UAE and on Saudi Arabia’s oil pipelines and their repercussions on the region.

Al-Sudais urged presidency officials to make these summits successful because the invited leaders were guests of Allah as well as the Kingdom’s.

He called on the presidency’s staff to be rewarded for their dedication and loyalty, and hoped the summit would a unifying force.