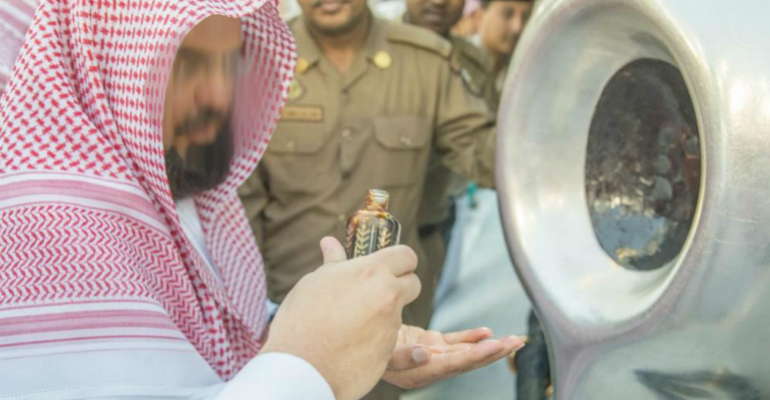 In front of the famous Black Stone, stands a guard who monitors and helps pilgrims who want to reach the stone.

With every passing hour, a new guard takes on the responsibility of keeping the Black Stone and its eager visitors safe.

Security officials told Al-Arabiya English that the 24 guards who protect the stone are selected based on a certain list of criteria that ensures they are right for the job, like being physically fit and being able to handle the heat.

Officials from the General Presidency for Affairs of the Grand Mosque purify the area after every prayer with sanitizers, rose water, Oud, and specially-made purifiers.

While many people might assume that the Black Stone is one whole stone, it is actually comprised of eight small rocks, the largest of which is the size of a date, that are molded together.

The Black Stone is located in the eastern corner of the Kaaba and is about a meter and a half from the ground. It is surrounded by a silver frame that is fastened by silver nails to the Kaaba’s outer wall.

The Black Stone signifies the beginning and end of each circumambulation around the Kaaba, as pilgrims often wave at or attempt to touch the stone with each round of tawaf.