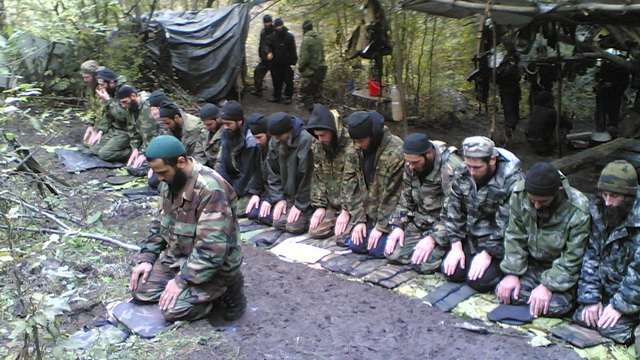 All praise be to Allaah, Lord of the worlds, and may Allaah send salutations upon Muhammad and his family and his companions. To proceed:

It is no secret that which has come to exist recently in the country of Chechnya and Daghestan in terms of the communist aggression and that which has occurred as a result of it in killing, displacement, destruction and oppressive harm which has resulted in the death of many thousands simply because they are Muslims, believers in Allaah the Almighty.

And these assaults have offended and saddened all Muslims, and from that which is obligatory upon the people of Islaam (Muslims) is to take interest in the affairs of their Muslim Brothers [and Sisters] and take care to alleviate their pain and [seek to] remedy their affliction. It has been mentioned in a hadeeth:

«Certainly the Muslims are one, their blood/lives are equal».

And the meaning of them being «one» is that Islaam has united them and with that they help each other and co-operate in that which causes them victory and strength and repelling the deception of their enemies.

And Allaah (Subhaanahu wa Ta’aala) has commanded us to support the believers everywhere as He the Almighty says:

{But if they seek your help in religion, it is your duty to help them}, [Soorah al-Anfaal, Aayah 72].

And He has informed the believers about taking care or their Brothers [and Sisters], as He the Almighty says:

{The believers, men and women, are helpers/supporters/friends/protectors of one another}, [Soorah at-Towbah, Aayah 71].

There is no doubt that the effects of this care is [extending] support and co-operation and exerting all abilities for the victory of Islaam, its people (the Muslims) and raising the Word of Allaah (Islaam). This has been the practice and perseverance of the Muslims in every time and place. That which exists between them in faithful brotherhood results in love and pity such that the Prophet (sal-Allaahu ‘alayhi wa sallam) has described them as one body in his statement:

So the believers in every place co-operate with each other as the Prophet (sal-Allaahu ‘alayhi wa sallam) said:

While [saying that] the Prophet (sal-Allaahu ‘alayhi wa sallam) clasped his hands, by interlacing his fingers», [Saheeh Muslim].

So from these evidences, it is obligatory upon the Muslims to:

Firstly: Supplicate for their Brothers [and Sisters] in that land for victory to overcome their enemies;

Secondly: To supply them with weapons and real power with which they are able to strive and kill their enemies [on the battlefield];

Thirdly: Strengthen them with financial donations, as they are in desperate need of food, clothing and all that [which assists in becoming] strong and prevents [reduces] the pain of striving and harm, and treating anyone amongst them who has been [struck with] injury or is in pain.

{March forth, whether you are light (being healthy, young and wealthy) or heavy (being ill, old and poor), strive hard with your wealth and your lives in the cause of Allaah}, [Soorah at-Towbah, Aayah 41].

{That you believe in Allaah and His Messenger (Muhammad) and that you strive hard and fight in the cause of Allaah with your wealth and your lives}, [Soorah as-Saff, Aayah 11].

{Only those are the believers who have believed in Allaah and His Messenger, and afterward doubt not but strive with their wealth and their lives for the cause of Allaah}, [Soorah al-Hujuraat, Aayah 15].

…and in another hadeeth:

«Whoever prepares himself for battle, then it is as if he has fought in [the] battle».

So, it is upon the Muslims to take interest in the affairs of their Brothers [and Sisters], since whoever does not do so, then he is not from amongst them (i.e. a Muslim).

We ask Allaah to assist His Religion and raise His Word and grant the mujaahidoon victory in every land and make firm their foothold, block their [enemies] “arrows” and suppress the enemies, resist their malice and slaughter. For certainly, He has power over all things and may Allaah send prayers and salutations upon Muhammad and his family and his companions.