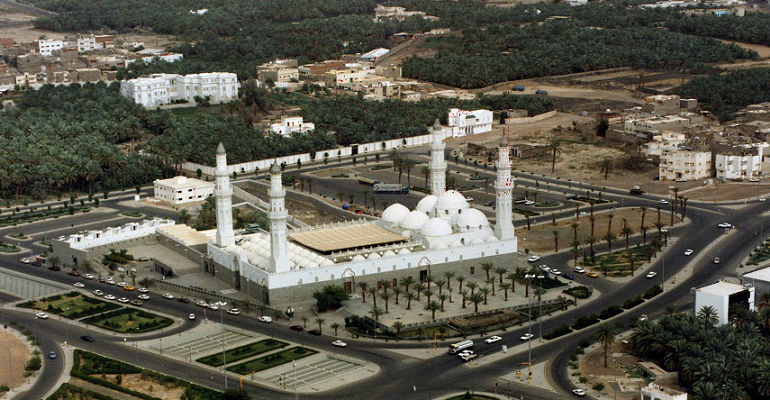 Response: The reception of the Prophet ﷺ when he arrived in Madeenah having made hijrah from Makkah was a great reception – which indicated the happiness of the companions (radhi-yAllaahu ‘anhum) at his arrival, and their love of the Messenger of Allaah ﷺ.

When they learnt about his departure from Makkah, they would go to al-Harrah [on the outskirts of Madeenah] waiting for [the arrival of] the Prophet ﷺ.

One particular day, they went out in anticipation of his arrival, and got sunstroke – and returned back to Madeenah. A Jewish man who was upon a watchtower looking for something himself caught sight of the Prophet ﷺ and his companions. So he called out at the top of his voice ‘O Arabs! Here comes your grandfather whom you have been waiting for.’ And so the Muslims made their way out to receive the Prophet ﷺ, and when he entered Madeenah, they rejoiced [at his arrival].

As for his companions, then those who were with him were Abu Bakr as-Siddeeq (radhi-yAllaahu ‘anhu) – whom Allaah (Ta’aala) had referred to his companionship [of the Prophet ﷺ] in His Book, when He said:

{If you do not aid the Prophet – Allaah has already aided him when those who disbelieved had driven him out [of Makkah] as one of two, when they were in the cave and he said to his companion, “Do not grieve; indeed Allaah is with us.”}, soorah at-Towbah, aayah 40

And [along] with them was a man known as ‘Abdullaah ibn Urayqit who was their guide along the way [from Makkah to Madeenah].