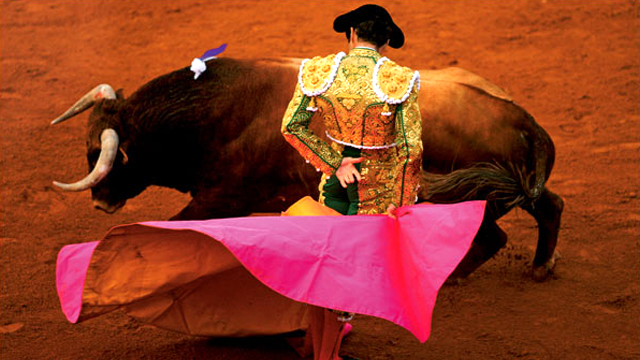 Response: If any harm is caused to the bull in the bullfight, then this [practice] is prohibited. That is because it is impermissible to hurt anmals or cause them discomfort.

And [even] if there is no pain [caused to the bull], then it is [still considered] as frivolity and larking around, [something] in which there is no good nor benefit. It is [simply] a waste of time.

[As for] buying the bull for the sake of this [bull]fight, then it is a waste of money. And if the [bull]fight is for a return (prize), then it is prohibited on all accounts.

So the situation has now turned to the ruling regarding bullfighting. If it harms the bull, then it is prohibited; And if done for a return (prize), then that is [also] prohibited [to take]. And if it is not like that [at all], then it is [still considered] a waste of time and money.

So it is not befitting for a sensible right-minded person to engage in that; We advise our brothers who like these [bull] fights which cause them to waste much time watching them on the television, we say to them: Indeed time is very [dear and] expensive than to waste it on this [idle] frivolity, in which there is no good.