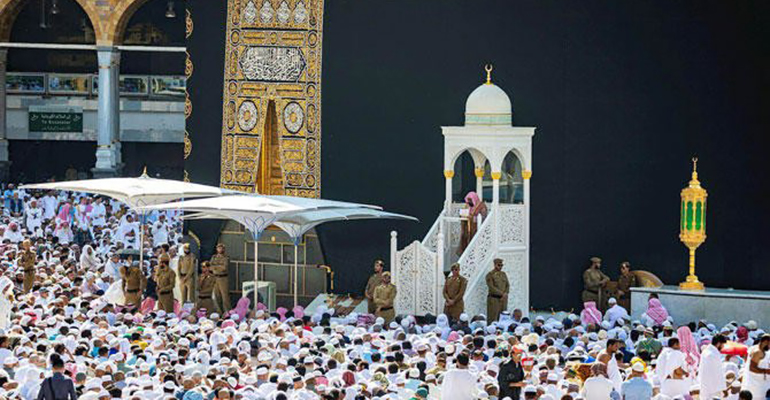 Saudi Arabia’s Islamic affairs minister and imams of the two holy mosques have condemned Saturday’s terrorist bombing at Al-Muhaya compound in Riyadh as a gruesome crime and likened it to Israeli terror against the Palestinians.

The bombing of a residential compound in the capital last Saturday, which killed at least 18 people and injured 120 others, violates the sanctity of the holy month of Ramadan, Islamic Affairs Minister Saleh Al-Asheikh said.

“It is in itself a big crime and would have been tantamount to declaring war on God and the Prophet if it had taken place in any other month. But it becomes the worst of crimes when it is committed in the holy month,” the minister said.

Dr. Saleh Bin Humaid, the imam of the Grand Mosque in Makkah and chairman of the Shoura Council, compared the actions of the suspected Al-Qaeda bombers who carried out the attack last week to Israeli terror in Palestinian territories.

In his Friday sermon to over one million faithful who thronged the large mosque complex, the imam said the terrorists who bombed the Riyadh compound were seeking to sow strife among Muslims.

“Are the terrorism of Israel and the terrorism of those (militants) coordinated?” Dr. Humaid asked. “Is the purpose to kill more Arabs and Muslims and create more violence and instability?”

Many of the casualties in Riyadh were women and children and the attack shocked Muslims worldwide.

Dr. Humaid urged everyone in the Kingdom including security forces and the media to combat terror and extremism.

In his sermon at the Prophet’s Mosque in Madinah, Sheikh Hussein Al-Asheikh said Muslims all over the world were shocked by the Riyadh terrorist bombing. “Pen and tongue will be unable to give an exact picture of that tragedy and the impact of that gruesome crime,” he said. The Muslim world as a whole was unanimous in condemning the Riyadh bombing, he added.

In his statement, Islamic Affairs Minister Saleh Al-Asheikh said killing an innocent person, especially a believer, without any reason was one of the biggest crimes in Islam. “Protection of a person, his property and dignity are among the main objectives of Shariah,” the minister said.

Al-Alsheikh urged all Muslims to stand united in the fight against terrorists. “It is the duty of every scholar and preacher, student, khateeb and imam of mosques and all other Muslims to work together against this common enemy.

“This is a flagrant act of hostility and a war against Islam and its followers in the home of Islam in the month of the Holy Qur’an,” he said.

“Muslims must weep when they see this assault on sanctity, these people who do not heed the holy month, and when they see the fundamentals of Shariah violated,” the minister said.

“God has given the utmost importance to security. It is a great blessing. God has promised that He will give believers peace and security after they lived in fear,” he said quoting a verse from the Qur’an.

“Worship of God, the spreading of the truth, the implementation of Shariah, the establishment of justice… can only flourish in safety and security. It is therefore the duty of every Muslim to protect them,” the minister added.