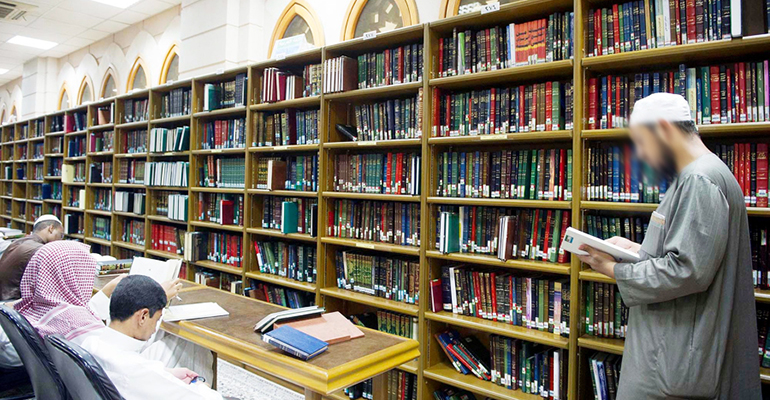 [For example], these two men sat down to eat. One of them [began] by eating with his right [hand] having uttered the Name of Allaah when he started to eat, and praised Allaah (Subhaanahu wa Ta’aala) when he finished [eating].

From where did he acquire these manners?

[He acquired them] with his knowledge of the Sharee’ah.

[As for] the other, [when] he sat down to eat, he did not utter the Name of Allaah [when he started to eat], and he ate with his left [hand], and he did not praise Allaah (Subhaanahu wa Ta’aala) when he finished [eating].

Because he was ignorant of the manners [prescribed by] the Sharee’ah.

So you are in need of learning the Sharee’ah so as to lift yourself out of [this state of] ignorance.

And it is narrated about Ibn Hazm the famous Zhaahiree [scholar] (rahima-hullaah) – that the reason for him seeking knowledge was that one day he entered the masjid at a time other than the time prohibited [to pray], and he sat down without praying the [two rak’ahs of the] tahiyyatul-masjid [prayer].

So those in the masjid said to him, stand up and pray [the] two rak’ahs [of tahiyyatul-masjid].

So he stood up and prayed two rak’ahs.

At another time, he entered [the masjid] after [the time of] ‘Asr and prayed [the] two rak’ahs [of tahiyyatul-masjid], and those in the masjid forbade him, saying “don’t pray two rak’ahs [because] this is the time prohibited to pray.”

So he said “Subhaa-nAllaah, when I sit down, you say for me to stand up and pray, and when I pray you say ‘don’t pray’ so [it appears] I am in need of knowledge.”

So from here he began to seek knowledge, and his rank in knowledge [of the Sharee’ah] is well-known to most of those present [here].