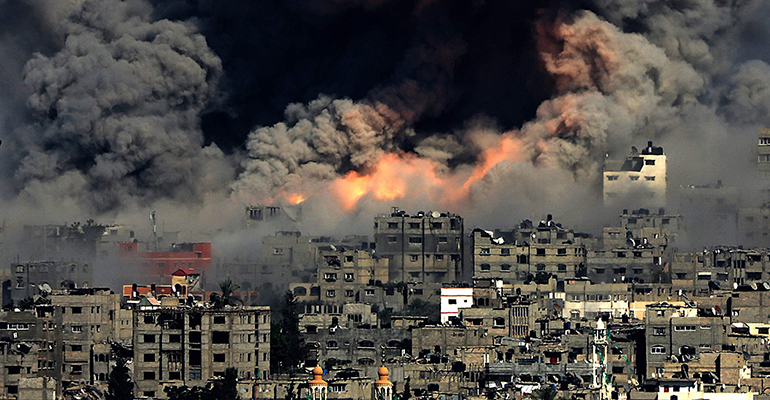 Earlier today, Fatwa-Online was informed that:

Shaykh ‘Abdul-‘Azeez Aal ash-Shaykh, the mufti (one qualified to pass fatwa) of Saudi Arabia and the head of the Council of Senior Scholars and The Permanent Committee for Islaamic Research and Fataawa mentioned in the khutbah of ‘Arafah that what is going on in Palestine is (Israeli) terrorism.

Summarily therefore, the Shaykh began by advising the congregation of pilgrims to fear Allaah in secret and openly and to soley single Him out for worship, in addition to establishing the pillars of the religion and holding steadfast to the clear path of Allaah and adhering to the Sunnah of His (final) chosen Prophet (Muhammad) (sal-Allaahu `alayhi wa sallam) in all their actions and speech.

The Shaykh explained that Allaah’s purpose in creating the Jinn and mankind was so that they would sincerely worship Him alone, having clarified for them all affairs of the religon (of Islaam) so that they can seek guidance from it. And He has given the servant (of Allaah) a choice (free will), just as he has clarified all that relates to the religion in terms of interacting with others and establishing justice, thus paving the righteous way for mankind.

The Shaykh added that the religion of Islaam has commanded respect for the rights and preservation of people in terms of wealth, property and the self, and it has commanded peace(making) at (times of) war, as well as the prohibition of killing women and children, stressing that Islaam is far removed from terrorism, and that ascribing terrorism to Islaam is a major injustice.

The Shaykh continued by saying: “Indeed waging war against the weak Muslims in Palestine is (Israeli) terrorism and oppression”.

The Shaykh stressed that: “Indeed the resentment of the enemies (of Islaam) is because the religion of Islaam is the seal (finality) of all the religions, and that its people are the best of people to come forth…” explaining that: “the religion of Islaam has given (each and) every person their rights and has honoured them by freeing them from the worship of (false) gods to the worship of the (true) Lord (Allaah) of the servants (of Allaah)”.

The Shaykh explained that: “the enemies of Islaam offer a false culture and civilisation which (negatively) differentiates between mankind, and nullifies (all) agreements, offering all types of weaponry to destroy mankind”.

The Shaykh mentioned that: “today the Muslim Ummah was passing through a severe phase which requires it to take a close look (at itself) so that it can become a single Ummah defending and protecting it’s ‘aqeedah”.

The Shaykh expressed: “that which has befallen the Ummah today is as a result of sins and weakness of eemaan (faith) in addition to the presence of partisanship (tahazzub) and (much) differing in the religion; and the last of the Ummah will never be corrected except by that which corrected the first of the Ummah”.