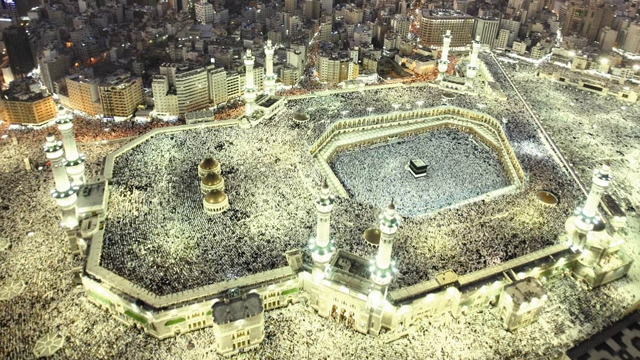 Question: When the traveller who is fasting reaches Makkah, should he break his fast so as to have the strength to perform the ‘umrah?

Response: The Prophet (sal-Allaahu ‘alayhi wa sallam) entered Makkah in the year of The Conquest on the 20th of Ramadhaan and he was not fasting; And he led the people of Makkah in praying two rak’ahs and then said to them:

«O people of Makkah! offer the prayer in full, for indeed we are people who are travelling».

Shaykh al-Islaam Ibn Taymiyyah and Ibn Katheer mentioned that the Prophet (sal-Allaahu ‘alayhi wa sallam) was not fasting that year, i.e. he refrained from fasting for ten days in Makkah during the Battle of the Conquest; In Saheeh al-Bukhaaree, it is narrated on the authority of Ibn ‘Abbaas (radhi-yAllaahu ‘anhu) who said: “He continued to refrain from fasting until the end of the month”.

Just as there is no doubt that he prayed two rak’ahs during this period since he was a traveller. So the one performing ‘umrah does not cease to be regarded as a traveller once he reaches Makkah, in which case he is not required to abstain [from food and drink and all that breaks the fast] if he arrived whilst not fasting. We may say to him it is better for you not to fast if that will give you more strength to perform the ‘umrah, so long as performing the ‘umrah will tire you.

And some people continue to fast even whilst traveling since fasting whilst travelling these days does not cause much hardship. So he continues his journey whilst fasting, and when he arrives in Makkah exhausted, he says to himself: “Should I continue fasting or delay performing the ‘umrah until after I have broken the fast, i.e. at night, or is it better for me to refrain from fasting so as to perform the ‘umrah immediately upon my arrival in Makkah?”

In this case, we say to him: It is better for you to refrain from fasting, [and] even if you were fasting then break your fast in order to perform the ‘umrah immediately upon your arrival in Makkah whilst you are energetic. This is because it is better for the one who arrives in Makkah to perform the ‘umrah, to promptly hasten in performing it, because when the Prophet (sal-Allaahu ‘alayhi wa sallam) would enter Makkah in ihraam, he would hasten to the Masjid [al-Haraam] such that he would make his mount kneel by the Masjid and then enter it to perform the rituals [of the ‘umrah] for which he was in the state of ihraam.

So breaking your fast so as to perform the ‘umrah with energy during the day is better than remaining fasting and performing your ‘umrah at night after you have broken your fast.

Some people burden themselves by fasting whilst travelling despite the hardship which is undoubtedly contrary to the Sunnah. [Certainly], the [following] words of the Prophet (sal-Allaahu ‘alayhi wa sallam) apply to them:

«It is not from righteousness to fast whilst travelling».