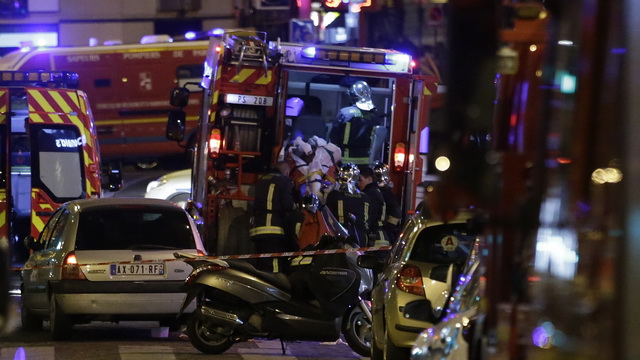 The “heinous” Paris attacks are a violation of all religions and underline the need to intensify efforts against terrorism, Saudi Arabia’s Foreign Minister Adel Al-Jubeir said on Saturday as he arrived in Vienna for talks on ending Syria’s civil war.

“I wanted to express our condolences to the government and people of France for the heinous terrorist attacks that took place yesterday which are in violation and contravention of all ethics, morals and religions,” he told reporters.

“The Kingdom of Saudi Arabia has long called for more intensified international efforts to combat the scourge of terrorism in all its forms and shapes,” Jubeir said.

Earlier a Saudi Foreign Ministry source called for a concerted effort by the international community to eradicate “these dangerous and destructive threats that target security and stability around the globe, and poses a threat to all religions and international norms and conventions.”

The source added that an effective means for joint international action was needed to fight those who sought “to harm global security under any pretext.”

Saudi Arabia’s highest religious body also condemned the coordinated assault by gunmen and bombers that killed 128 people across Paris as contrary to Islamic values. “Terrorists are not sanctioned by Islam and these acts are contrary to values of mercy it brought to the world,” said a statement by the Council of Senior Scholars carried by the Saudi Press Agency.

The statement by the Counci said that eliminating terrorism worldwide would require a “concerted effort” from a “unified moral stance.”

Saudi Arabia itself has been battling the scourge of terrorism since 1995.

This year terrorists targeted mosques in various parts of the Kingdom which resulted in many casualties and injuries.

On May 22, a suicide bomber attacked a mosque in a village in Qatif governorate during Friday prayers, killing at least 21 people and injuring 80 others.

Last month, a suicide bomber killed two people and injured 26 in a mosque in the southern city of Najran.

“The time has come for the world to unite to confront this monster. Such acts are contrary to all religious, humanitarian and civilized principles,” Tayyeb said at the opening of the conference in the southern city of Luxor focused on combating “extremist thought.”

The Daesh (the so-called IS) terrorist group claimed responsibility for the wave of attacks in Paris and said France would remain at the “top of the list” of its targets. An online statement said eight militants armed with explosive belts and automatic weapons attacked carefully chosen targets in the “capital of adultery and vice,” including a soccer stadium where France was playing Germany, and the Bataclan concert hall, where an American rock band was playing.

Meanwhile, sources close the investigation of the deadly attacks in Paris said that Syrian passport has been found near the body of one of the suicide bombers who blew himself up on Friday near a Paris soccer stadium. — With agencies