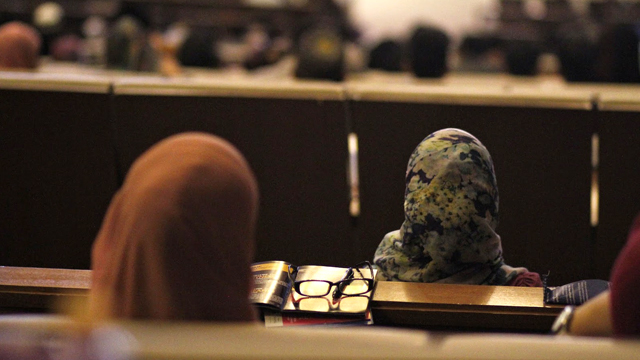 Question: The questioner says that she is preparing herself in order to enroll at the Faculty of Medicine where the period of study is up to six years; She wishes to enroll for two reasons: The first one is that she wants to become a doctor and offer humanitarian assistance – specifically to the Muslims; And the second [reason] is that she wants to take responsibility for herself with an honourable job; This thereby necessitates – if she so chooses – to freely mix with non-mahram men in the lecture room and the gatherings and other than that. Quite possibly, she may from time to time be compelled to be alone with a man – and this opposes the [teachings of the] religion; However, she will maintain her hijaab and will not speak to him [nor other than him] about anything outside the subject of study. Nor will she look at her male colleagues, however, she will look at the lecturer. Is it [then] permissible for her to enroll at the Faculty [of Medicine]?

Response: Firstly, I thank you for your care and attention to knowing the legal ruling regarding that which you have posed; This is indicative of you being religiously upright; I ask Allaah to increase you in guidance and grant you success.

As regards that which you asked about in that you wish to become a doctor to offer humanitarian assistance and assume personal responsibility to seek a source of honourable income, in addition to that which it entails in freely mixing with non-mahram men, rather, in some cases to be alone with just one of them; Then know that this is not permissible, due to his (sal-Allaahu ‘alayhi wa sallam) saying:

«No man is alone with a non-mahram woman except that Shaytaan is the third one present [amongst the two of them]», trasnmitted by Ahmad, at-Tirmidhee – who said it is Hasan-Saheeh

…transmitted by al-Bukhaaree and Muslim; And other than that from the legislated texts with this [same] meaning.

And remember that sustenance is from Allaah, and that which is with Allaah is not attained by sinning, and it is possible that Allaah (‘Azza wa Jall) will assume the responsibility to take care of you. He (Subhaanahu wa Ta’aala) says:

{And no moving (living) creature is there on earth but its provision is due from Allaah} – Soorah Hood, Aayah 6

So it is befitting for a person to strive hard in seeking sustenance from that which is permissible whilst maintaining a conscience of fear of Allaah (Subhaanahu wa Ta’aala):

{And whosoever fears Allaah and keeps his duty to Him, He will make a way for him to get out [from every difficulty]. And He will provide him from [sources] he never could imagine. And whosoever puts his trust in Allaah, then He will suffice him. Verily, Allaah will accomplish his purpose. Indeed Allaah has set a measure for all things}, soorah at-Talaaq, aayahs 2-3

And know that whoever abandons something for the sake of Allaah, Allaah will compensate him with that which is better than it.

And may Allaah grant everyone success in that which pleases Him and earns His pleasure.