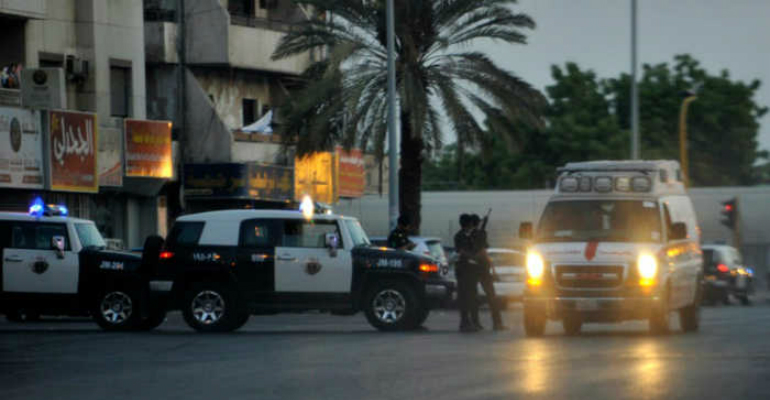 The Imams and Khateebs of the Grand Mosque in Makkah and the Prophet’s Mosque in Madinah lambasted terrorism and killing of innocent people, especially in the vicinity of Al-Haram Al-Nabawi at the end of Ramadan, Saudi Press Agency said.

In Makkah, the guests of Allah performed the first Friday prayer after the end of the holy month of Ramadan in the Grand Mosque amid integrated services and arrangements by the General Presidency for the Affairs of the Two Holy Mosques.

The presidency provided all services so that worshipers performed their prayers and rites with ease and devotion. The floors and courtyards of the Grand Mosque were full with worshipers who came early so as to find some space. Even the third Saudi expansion was full.

Meanwhile in the Prophet’s Mosque in Madinah, worshipers and visitors performed the first Friday prayer after Ramadan in an atmosphere of spirituality and safety amid integrated services by all authorities including the Agency for the Affairs of the Prophet’s Mosque, the police, Traffic Department, Directorate of Health Affairs, Ministry of Commerce, branch of the Commission for the Promotion of Virtue and Prevention of Vice, the Civil Defense and several private sector agencies.

The Imam and Khateeb of the Grand Mosque Sheikh Dr. Khaled Bin Ali Al-Ghamdi stressed that it is among the most heinous acts and gravest sins to intentionally and adamantly kill innocent people, whose lives are inviolable. Such people have violated the sanctity of time and place by carrying out blasts and intentional sabotage. Their aim is to create destruction and chaos, disturb security and destabilize the country in order to achieve evil objectives. There are criminal gangs, sectarian terrorist organizations and malicious enemies. They have used ignorant people as tools and fuel to kindle the fires of destruction, chaos and instability in Muslim countries, forefront of which is the Kingdom.

Sheikh Al-Ghamdi said that the suicide bombings in three different places in the country at the end of Ramadan, and the bloodshed and terrorizing of peaceful and innocent people, to the extent that such incidents have reached the Prophet’s Mosque, is a calamity for every Muslim, who loves the two holy mosques.

It is also a sad, painful and confusing incident causing great concern. It is sad and painful because it occurred in the country of the two holy mosques — the cradle of revelation. The victims were innocent Muslims and loyal security men. May Allah Almighty have mercy on their souls.

The incident could have reached the Prophet’s Mosque were it not for divine providence and the efforts of the security men. It is bewildering and causing concern because all wise people are asking: Where have these ignorant attackers come from? They have violated the sanctities of time and place. How have they reached this dangerous stage in belittling lives and sanctities to the extent of making light of shedding the blood of their parents, relatives and innocent people? This is a flagrant violation of the sanctity of time and place.

Dr. Al-Ghamdi stressed that this is a strange phenomenon to Muslim societies and the country of the two holy mosques in particular. He said thanks to Allah this blessed country is practicing moderation and magnanimity of Islam, whether rulers or subjects. This confirms that this phenomenon is based on deviant and extremist thought and concepts that are way away from our Muslim society. They are disseminated by malicious enemies carrying the banner of corruption, evildoing, crime, disturbing security and destabilizing the country. These are a desperate attempt to distort the bounties this country is enjoying including security, safety, correct creed and approach and serving and caring for the two holy mosques.

Sheikh Al-Ghamdi stressed that Muslims everywhere must understand this fact. It requires of us to stand firmly and decisively against this painful and sad phenomenon. We must stand shoulder-to-shoulder united in word and deed by renouncing conflicts and disputes.

Every person who is capable of reforming and guiding Muslims including Ulema, intellectuals, politicians, mediamen and experts in social media must immunize the society and its sons. They must expose these (deviant) ideas and stand by the rulers and warn against these deviant thoughts and ideas. All must have a high sense of awareness and responsibility and understand the seriousness of this stage. Every one of us must guard the two holy mosques. Every one of us has a duty he must carry out, Sheikh Al-Ghamdi said.

Defending the country of the two holy mosques and Muslims’ sanctities, creed and religion are among the highest levels of jihad and among the most important duties, Sheikh Al-Ghamdi stressed.

He said Allah’s religion will be victorious and the country of the two holy mosques will be protected with the care of Allah Almighty. The sanctities of the Muslims are in trustworthy hands that will hit firmly and with all strength whoever strives to create chaos, sabotage and violate Muslims’ sanctities and their holy places.

Meanwhile in his Friday sermon, Imam and Khateeb of the Prophet’s Mosque in Madinah Sheikh Hussein Al-Asheikh spoke about the deviant group that terrorized the fasting believers and worshipers with blasts in the country of the two holy mosques.

He said towards the end of Ramadan when Muslims were happy that they had completed their fasting, had prayed to Allah to accept their prayers and supplications and completed the reciting of the whole Qur’an, they were shocked by three bloody criminal terrorist blasts in the country.
The perpetrators of these blasts have committed the ugliest and gravest sins. They have deviated from the teachings of the Holy Qur’an and the Prophet’s Sunnah and Muslims’ consensus, he said.

Don’t they fear Allah? What will they say when Almighty Allah asks them why they have shed the blood of innocent people? What is their stance towards their Creator when they are spreading evil and corruption by terrorizing peaceful worshipers and killing innocent fasting Muslims especially in the vicinity of the Prophet’s Mosque during the great holy month when people are devoting their time to worshiping Allah.

Al-Asheikh said the greatest weapon the enemies of Islam use against the religion is by fanning the factors of discord and driving the Muslim youth away from the Muslim consensus under pretexts whose exterior shows mercy while the interior is evil and torment. They do this under the pretext of supporting the religion and serving its causes. They try their utmost to keep the youth away from the pious Ulema who practice moderation.