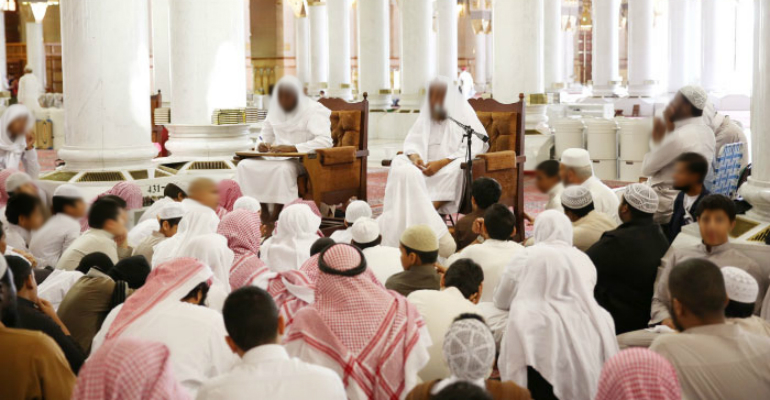 The Grand Mosque in Makkah is not only the heart of spirituality but also the center of Islamic knowledge as worshipers from different parts of the world attend lectures and lessons given by prominent Islamic scholars at the mosque on a daily basis.

Twenty-five classes are held daily at the mosque and are attended by a large number of pilgrims and visitors. They ask questions on various topics including religious rites to get their doubts cleared and make sure they correctly follow Islamic teachings.

The practice of giving organized Islamic lessons started at the Grand Mosque centuries ago with the aim of imparting religious knowledge to pilgrims and visitors from around the world coming to perform Haj and Umrah.

The companions of the Prophet Muhammad (peace be upon him) and their followers used to sit outside the Kaaba during Haj and Umrah seasons to listen to lectures given by scholars among them.

Sheikh Saleh Al-Laheedan, former chairman of the Supreme Judiciary Council, used to teach Islam to pilgrims and students at the Grand Mosque during Ramadan. He began his class by talking about a particular topic and then answered questions from the audience on different subjects.

Sheikh Saad Al-Shathry gave two lectures daily: one in the morning after Fajr and one in the evening after Maghreb prayer. Sheikh Abdul Rahman Al-Ajlan, former chief justice of Qassim, conducts lessons everyday throughout the year at the King Fahd Annex. His lectures attract a large number of college and secondary school students in Makkah.

Islamic lectures and classes continue in the corridors of the Grand Mosque uninterrupted as a result of the dedication of well-known Islamic scholars who wanted to impart knowledge on Islamic Shariah and related subjects to pilgrims and visitors.

Sheikh Yahya Othman deserves special commendation in this respect as he gave such lectures for the past 40 years. Other longstanding teachers are Sheikh Abdul Rahman Al-Ajlan and Sheikh Mohammed Hijazi, who teach the fundamentals of the faith, Tafsir (commentary of the Qur’an) and Hadith (traditions of the Prophet).