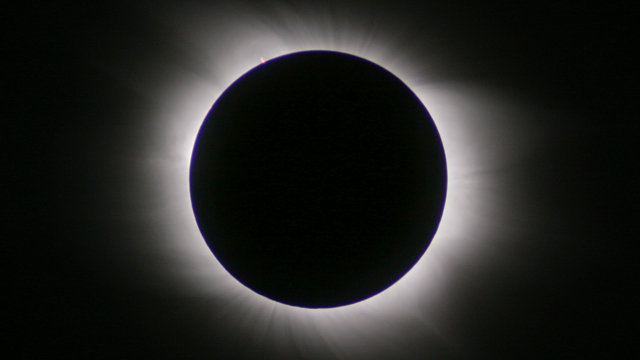 Question: Is it permissible to raise one’s head up [towards the sky] to look at the Sun during the Eclipse prayer?

Response: This is not permissible; Because the Messenger of Allaah (sal-Allaahu ‘alayhi wa sallam) prohibited the raising of the eyes [towards the sky] during the prayer, and he affirmed his statement in that regard when he said[1]:

«…they had better stop doing that (looking up towards the sky) otherwise their sight will be snatched away», and in [another] narration [he said]:
«…otherwise [their sight] will not return [back from the sky] to them»

«…the people had better stop raising their sight towards the sky/heaven during the prayer otherwise [their] sight will not return [back] to them», and in [another] narration [he said]:

«…otherwise their sight will be snatched away»

…therein is an affirmed prohibition and a severe threat regarding that. And [in this regard] a consensus has been transmitted as to the prohibition of [doing] that.

And they differed regarding the disliking of raising the sight towards the sky during the supplication in other than the prayer.

And Shurayh and others disliked that, whilst the majority permitted it, saying:

{And in the heaven is your provision, and that which you are promised}, [Soorah adh-Dhaariyaat, Aayah 22]