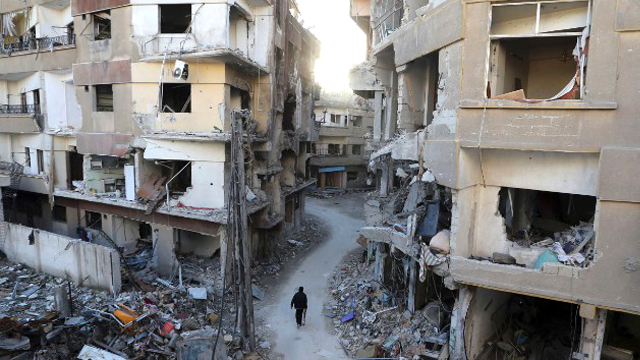 A court in Riyadh sentenced an imam to five years in prison after he was convicted of glorifying takfirist (accusing others of apostasy) organizations in a sermon he delivered more than a year ago, Asharq Al-Awsat newspaper reported.

The imam, whose name was not disclosed, was found guilty of inciting against the state through “glorifying” takfiri organizations and leaders of Al-Qaeda in the sermon to worshipers who gathered for Eid Al-Fitr prayer in August 2013.

He was also convicted on the grounds of exploiting Friday prayers to spread extremist ideas.

The Ministry of Islamic Affairs had barred the preacher from delivering sermons before security forces detained him following a seditious sermon he delivered at the Sheikh Mohammed Bin Abdulwahab Mosque in Riyadh.

In addition to calling upon Muslim scholars and mothers to urge youths to take arms and mobilize in conflict-torn countries, he prayed that the “Al-Qaeda lady,” a Saudi woman serving a 15-year prison term in the US for planning and aiding terrorist activities, to be released.

The imam had accused Muslim scholars of letting down whom he called the Mujahideen in prisons and asked them to support these prisoners through fatwas (religious edicts) and their personal attitudes.

He also urged all mothers to raise their children to be real advocates of jihad and promoters of virtue.

“Many Muslim lions have gone to Syria to fight the tyrant (Bashar Al-Assad) and defend Islam,” he said.

He also praised the work of Abu Bakr Al-Baghdadi, the leader of Islamic State.

The imam encouraged young Muslims to travel to Egypt to fight alongside members of the Muslim Brotherhood.

Although half the term was suspended, the accused was barred from delivering sermons at mosques and public gatherings and will be placed under a five-year travel-ban upon his release.

Both the defense and prosecution have expressed refusal to accept the verdict and plan to appeal the ruling.

The judge told the parties that they must submit an appeal no later than 30 days from the issuance of the verdict.

According to a senior official at the Ministry of Islamic Affairs, imams have the liberty to prepare their own sermons and decide the topics they wish to tackle.

“A special committee of the ministry chooses the imams after putting them through tests and personal interviews,” he said.