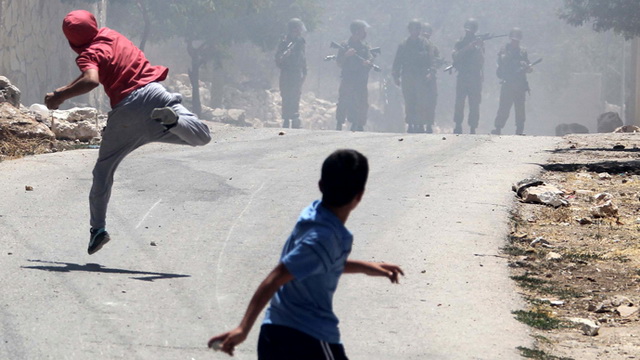 Question: What is the Islaamic Sharee’ah perspective of the current jihaad of the Palestinians; Is it jihaad in the Path of Allaah, or jihaad for the sake of land and freedom?

And is jihaad for the sake of land [and freedom] considered as jihaad in the Path of Allaah?

Response: It has been confirmed to us by trustworthy and reliable witnesses that the Palestinian intifaadhah (uprising) and those who have stood forth in this are from the most dedicated Muslims there, and that their jihaad is [an] Islaamic [one]. This is because they are oppressed by the Jews, and that which is obligatory upon them is to protect their religion and themselves and their families and children and to drive out their enemy from their land with all they are able to of strength.

And these trustworthy and reliable [witnesses] who joined [the Palestinians] in their jihaad and assisted them in that have informed us of their (the Palestinians’) Islaamic enthusiasm and their abidance to applying the Islaamic Sharee’ah amongst them. So that which is obligatory upon the Islaamic countries and the rest of the Muslims is to assist and support them so they can be free of their enemy, so as to return to their land, in accordance with the saying of Allaah (Subhaanahu wa Ta’aala):

{O you who believe! Fight those of the disbelievers who are close to you, and let them find harshness in you, and know that Allaah is with those who are pious}, [Soorah at-Towbah, Aayah 123]

{March forth, whether you are light (being healthy, young and wealthy) or heavy (being ill, old and poor), strive hard with your wealth and your lives in the Path of Allaah. This is better for you, if you but knew}, [Soorah at-Towbah, Aayah 41]

{O You who believe! Shall I guide you to a commerce that will save you from a painful torment}

{That you believe in Allaah and His Messenger (Muhammad sal-Allaahu ‘alayhi wa sallam), and that you strive hard and fight in the Path of Allaah with your wealth and your lives, that will be better for you, if you but know!}

{[If you do so] He will forgive you your sins, and admit you into Gardens under which rivers flow, and pleasant dwelling in Gardens of ‘Adn ­ Eternity [‘Adn (Eden) Paradise], that is indeed the great success}

{And also [He will give you] another [blessing] which you love, help from Allaah [against your enemies] and a near victory. And give glad tidings [O Muhammad sal-Allaahu ‘alayhi wa sallam] to the believers}, [Soorah as-Saff, Aayaat 10-13]

And the verses with this meaning are many.

And it is authenticated from the Messenger of Allaah (sal-Allaahu ‘alayhi wa sallam) that he said:

«Make jihaad against the mushrikoon with your wealth, your selves and your tongues (speech)»

And because they are oppressed, then it is upon their Muslim brethren to aid them against those who oppress them, as the Prophet (sal-Allaahu ‘alayhi wa sallam) said:

«A Muslim is the brother of a[nother] Muslim; he does not oppress him and nor does he hand him over [to the enemy]», its authenticity is agreed upon by both al-Bukhaaree and Muslim.

“O Messenger of Allaah: [we understand about] assisting him when he is oppressed, so how do we assist him when he is the oppresser?” He (sal-Allaahu ‘alayhi wa sallam) said:

«Restrain him from oppressing [anyone], for that is assisting your [Muslim] brother».

So we ask Allaah to grant our mujaahideen brethren victory in the Path of Allaah over their enemies in Palestine and elsewhere, and to unite them upon the truth and to grant all the Muslims the ability to assist them and to stand firm against their enemies and to forsake the enemies of Islaam wherever they may be and to descend upon the evil-doing and criminal people/nation [much] suffering, [that] which does not cease, indeed He is the All-Hearing.