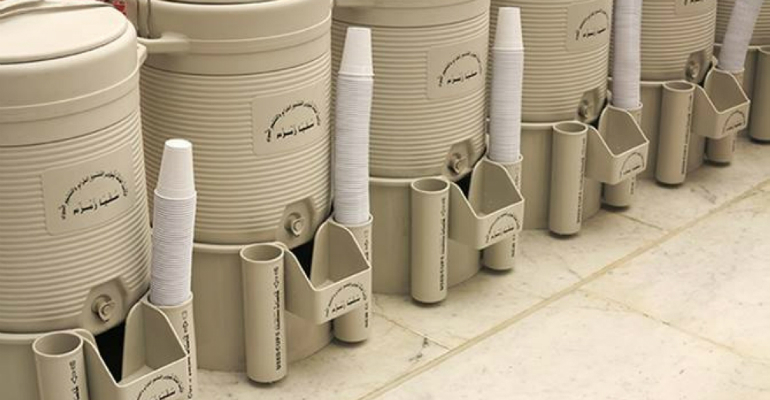 The Zamzam well will be spruced up to ensure the steady flow of blessed water, Sheikh Abdul Rahman Al-Sudais, chairman of the Presidency for the Affairs of the Two Holy Mosques, has announced.

He said Custodian of the Two Holy Mosques King Salman has approved the project which will take about seven months to complete, and will end before Ramadan.

The project consists of two parts. The first is to establish five service crossings for Zamzam well at the eastern mataf area. The total width of the crossings is eight meters and length 120 meters.

The second part of the project is the sterilization of the areas around Zamzam well by removing the debris of concrete and steel used in the old cellar of the Grand Mosque.

The project also includes installing sterilized gypsum around the well to ensure the steady flow of water.

The Saudi Geological Survey has a Zamzam Studies and Research Center which analyses the technical properties of the well in detail. Water levels were monitored by hydrograph, which in more recent times has changed to a digital monitoring system that tracks the water level, electric conductivity, pH, Eh, and temperature.

Located around 20 meters away from the Kaaba, the Zamzam well is believed to be the oldest well on earth, as water has been flowing there for 5000 years. The holy well pumps up to 18.5 liters per second and is only 30 meters deep.

Some 120 tons of Zamzam water is transported on a daily basis to the tanks at Al-Masjid Al-Nabawi in Madina through tankers with special specifications to protect the water from contamination.

Zamzam water is provided in 7,000 sterile containers distributed inside and around the Prophet’s Mosque.