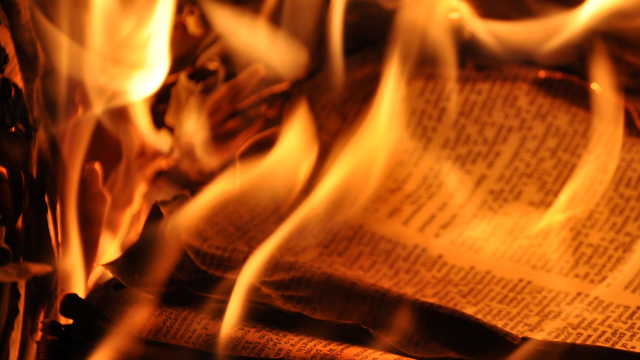 Question: What is your advice – O Shaykh – to the one who burns these books, namely: “al-Qutbiyyah” and “Madaarik an-Nathar” and attacks their authors?

Response: Burning those books which clarify the truth and encourage adherence to it, and [which] refute the falsehood and encourage refraining from it – whoever does that, then he is regarded as one who detests and turns away from the Path of Allaah (‘Azza wa Jall). And Allaah (‘Azza wa Jall) shall ask him regarding this act when he stands before Him naked, having nothing except that which he has brought forth of [his] good [deeds] and [his] bad [deeds]. Indeed this act is from the acts of the falsifiers and the acts of the misguided.

Are they declaring these books like [the book] “Shams al-Ma’aarif” and other than them from the books of magic and quackery?!! No! Indeed this is a false statement, a false belief, and a false call; And it is obligatory upon the one who says this to fear Allaah, and to know that with this action of his he is closing [the doors to] the Path of Allaah (Subhaanahu wa Ta’aala), and [as such] he is regarded as amongst the mischief makers (mischievous) on the Earth. And Allaah (Subhaanahu wa Ta’aala) says:

{And do not do mischief on the earth, after it has been set in order, and invoke Him with fear and hope; Surely, Allaah’s Mercy is (ever) near unto the good­doers}, soorah al-A’raaf, aayah 56

{…and do not mischief on the earth after it has been set in order, that will be better for you, if you are believers}, soorah al-A’raaf, aayah 85

{…and do good as Allaah has been good to you, and seek not mischief in the land. Verily, Allaah likes not the Mufsidoon (those who commit great crimes and sins, oppressors, tyrants, mischief-makers, corrupts)}, soorah al-Qasas, aayah 77