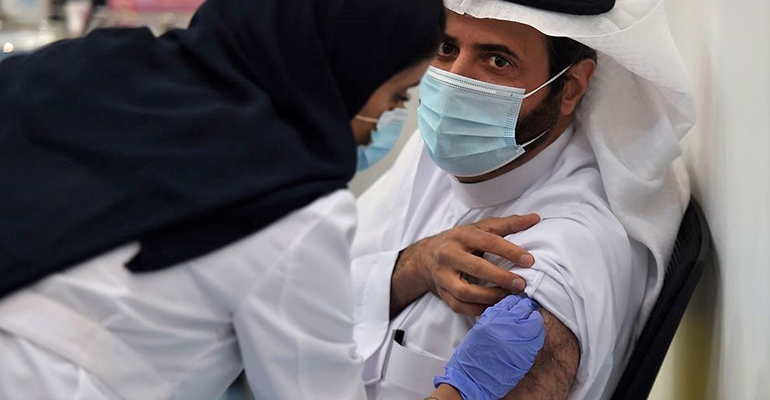 Saudi Arabia’s Grand Mufti and Chairman of the Council of Senior Scholars Sheikh Abdul Aziz Al-Asheikh reaffirmed that it is not permissible for COVID-19 patients to mix with others. He called upon all the people in the Kingdom to strictly comply with the precautionary measures and preventive protocols announced by the authorities to stem the spread of coronavirus.

The Grand Mufti attributed the increase in the number of people infected with the disease in a number of countries to the negligence in adhering to precautionary measures. He noted that health is a great blessing and therefore all people should strive to preserve their health and refrain from doing things that afflict or harm them such as diseases and epidemics.

“Islam has put in place preventive means to protect a person from getting sick, and it made cleanliness half of the faith. Islam emphasizes the aspect of preventing diseases before they are infected and transmitted to humans,” he pointed out.

Al-Asheikh said that the government has made great efforts to stem the spread of coronavirus by adopting all the possible ways and means, and these included a set of precautionary measures such as wearing mask, maintaining physical distancing, avoiding gathering of large numbers of people in one place, and other preventive and precautionary measures that have positive effects in limiting and controlling the spread of the epidemic, and reducing infections.

The Grand Mufti warned against the laxity on the part of some people in complying with the precautionary measures and preventive protocols and that led to a marked increase in daily infection cases, causing heavy pressure on the health system in the Kingdom, and other problems and crises for official bodies and the general public.

He called on the public to adhere to wearing a mask while going out and while mixing with others, and keeping physical distancing in places where there is mixing between people.

“The infected people and those in contact with them should be quarantined. It is not permissible for such people to go out and mix with others, and if someone does that, he is committing a great sin as it harms others and infects them with this dangerous disease and it may even lead to the loss of innocent souls,” he said while urging those who come from outside the Kingdom to stay indoors until after the end of the quarantine period specified by the concerned authorities.