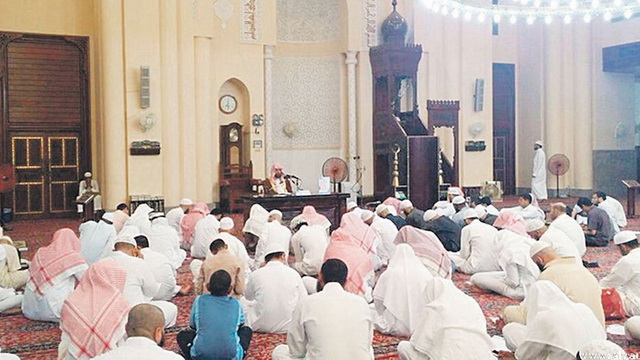 The Ministry of Islamic Affairs, Endowments, Call and Guidance has directed all imams of the mosques in Jeddah not to allow seminars, lectures or symposia without permission from relevant authorities.

The ministry’s order is aimed at preventing people with terrorism agendas from taking advantage of the pulpits in mosques, a local newspaper reported on Sunday.

Well-informed sources were quoted as saying that the ministry observed some attempts to promote lectures in mosques and attract audiences. The lectures mostly involved explaining religious books.

The decision has been taken against the backdrop of information available on the debates and chats on social media, and some ads on holding lectures and seminars inside the city’s mosques.

The sources said the ban order states that “no lecture or seminar can be held without prior permission from the competent bodies, and no religious scholar can be hosted without submitting a request to the Makkah governorate.”

Earlier, the Ministry of Education took the same decision on holding seminars or lectures, or distributing pamphlets and publications or directions in schools across the Kingdom. It has said that the same can be done only after getting the official approval of the deputy minister. The same ban applies on vocal and visual materials, regardless of its subject matter or source.

The step was aimed at preventing the circulation of material not linked with the educational sphere, or disseminates extremist thoughts. The regulations involved all government and private schools, and the headquarters of the ministry in all regions of the country. The regulations also stipulated that the approved activities must be carried out by Saudis only.