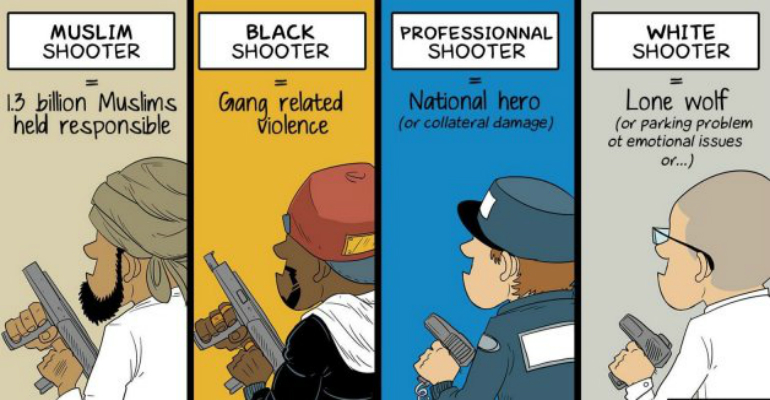 Every time an act of terror or shooting occurs, Muslims closely watch the news with extreme trepidation praying that the suspect is not Muslim. This is not because these terrorists are likely to be Muslim but rather because in the instances where they happen to be, we see amplified mass media coverage and extreme unjustified hatred towards Muslims.

1. Non-Muslims make up the majority of terrorists in the United States: According to the FBI, 94% of terrorist attacks carried out in the United States from 1980 to 2005 have been by non-Muslims. This means that an American terrorist suspect is over nine times more likely to be a non-Muslim than a Muslim. According to this same report, there were more Jewish acts of terrorism in the United States than Islamic, yet when was the last time we heard about the threat of Jewish terrorism in the media? For the same exact reasons that we cannot blame the entire religion of Judaism or Christianity for the violent actions of those carrying out crimes under the names of these religions, we have absolutely no justifiable grounds to blame Muslims for terrorism.

2. Non-Muslims make up the majority of terrorists in Europe: There have been over one thousand terrorist attacks in Europe in the past five years. Take a guess at what percent of those terrorists were Muslim. Wrong, now guess again. It’s less than 2%.

3. Even if all terrorist attacks were carried out by Muslims, you still could not associate terrorism with Islam: There have been 140,000 terror attacks committed worldwide since 1970. Even if Muslims carried out all of these attacks (which is an absurd assumption given the fact mentioned in my first point), those terrorists would represent less than 0.00009 percent of all Muslims. To put things into perspective, this means that you are more likely to be struck by lightening in your lifetime than a Muslim is likely to commit a terrorist attack during that same timespan.

5. If you are scared of Muslims then you should also be scared of household furniture and toddlers: A study carried out by the University of North Carolina showed that less than 0.0002% of Americans killed since 9/11 were killed by Muslims. (Ironically, this study was done in Chapel Hill: the same place where a Caucasian non-Muslim killed three innocent Muslims as the mainstream media brushed this terrorist attack off as a parking dispute). Based on these numbers, and those of the Consumer Product Safety Commission, the average American is more likely to be crushed to death by their couch or television than they are to be killed by a Muslim. As a matter of fact, Americans were more likely to be killed by a toddler in 2013 than they were by a so-called “Muslim terrorist”.

When a drunk driver causes a car accident, we never blame the car manufacturer for the violent actions of that driver. This is because we understand that we cannot blame an entire car company that produces millions of safe vehicles just because one of their cars was hijacked by a reckless person who used it to cause harm. So what right do we have to blame an entire religion of over 1.6 Billion peaceful people because of the actions of a relatively insignificant few?

I will not deny that terrorism is a real threat, it definitely is. However, it is extremely incorrect to associate the words “Muslim” and “terrorist” when literally all the facts implore you to do otherwise. The only way that we as Americans can defeat terrorism at home and across the world is by accurately targeting its root causes. There have been 355 mass shootings in the United States this year and falsely blaming Muslims for the San Bernardino shooting will do absolutely nothing to address this serious problem. It is time that we begin addressing terrorism on an educated and factual level.

As an American Muslim, I plead you all to deeply consider the facts mentioned here the next time you see a news headline about Muslims and terrorism. Martin Luther King Jr. once said, “Hate cannot drive out hate, only love can do that”. We cannot allow the disparity in media coverage to blind us from the facts and turn us into hateful people, we are smarter than that.