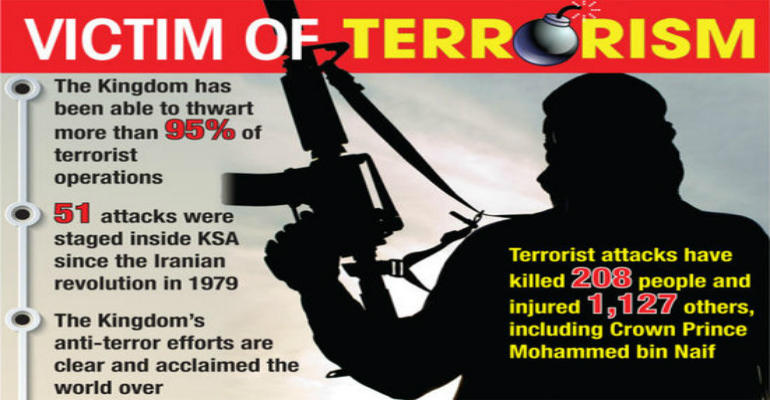 Saudi Arabia has been able to thwart more than 95% of terrorist operations according to a security strategy praised by the world.

Saudi Arabia is one of the first countries that paid attention to fighting terrorism at various levels, as it has carried out serious steps in the fight against this phenomenon locally, regionally, and internationally, and effectively contributed to fighting it in accordance with international regulations.

The Custodian of the Two Holy Mosques said in his speech during the opening of the World Islamic Conference on Combating Terrorism, which was held by the Muslim World League in Makkah last year, that the Islamic nation is threatened by terrorism’s murders and crimes which go beyond the borders of the Islamic world, and falsely raise the banner of Islam, which is completely innocent of such terrorism.

The 42nd meeting of the Council of Foreign Ministers of the Organization of Islamic Cooperation hosted by Kuwait in 2015, under the theme “Shared Vision on Promoting Tolerance and Renouncing Terrorism,” called for a commitment to the goals and principles of the organization, besides commitment to the recommendations of the World Islamic Conference which was held in Makkah.

The strategy of fighting and combating terrorism in the Kingdom has been very clear, and it has been recognized by the world for such efforts. Saudi law enforcement agencies managed to destroy terror plots and their sources, and hunted them down regionally and internationally, besides listing organizations that are considered terrorist by the Kingdom.

Crown Prince Mohammed bin Naif, minister of interior, himself escaped an assassination attempt by Al-Qaeda, and that shows that Saudi Arabia is targeted by terrorism which, unfortunately, cooperates politically with many countries to create chaos and instability in the region.