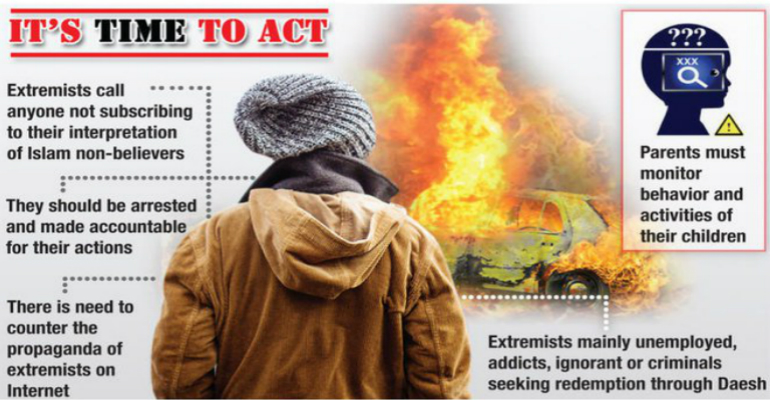 There should be a heavy clampdown on those preaching extremist ideologies and trying to convince young people to join terrorist groups, according to several scholars and intellectuals.

They said that there appeared to be a growing tendency in society for these extremists to label others as non-believers and call for revolution. They must be arrested and held accountable for their actions, they were quoted as saying by a local publication on Wednesday.

Ahmad Al-Rudeiman, professor of Islamic studies at Hail University, said that the two citizens who killed their parents and seriously injured their brother had committed a heinous crime. There was a need to counter the propaganda of those teaching young people to carry out these acts.

Al-Rudeiman said young people mistakenly believe that they are carrying out acts in the name of Allah but are only involved in criminal offenses. Many of them who received training overseas return to the Kingdom as ticking time bombs, and proceed to launch attacks.

He said many young Saudis are communicating with these gangs on social media because they cannot travel to places where fighting is taking place. Action needs to be action taken to confront these people on the Internet and counter their propaganda, he said.

Ahmad Al-Ghamdi said the crimes of the two young men were virtually unimaginable, and showed how brainwashed they had become by attempting to eliminate all those who stood in their way of joining Daesh and carrying out attacks on mosques and police officers. He said the whole community should cooperate to fight these terrorists, with parents monitoring the behavior and activities of their children.

Writer Ahmad Al-Ansari said this appeared to be an isolated crime but was likely caused by poor upbringing and lack of faith. Violence against one’s parents cannot be justified under any circumstances. It was also known that Deash supporters were mainly unemployed, addicts, ignorant or criminals seeking redemption through Daesh. He said the government should do more to educate young people about the dangers of these groups.