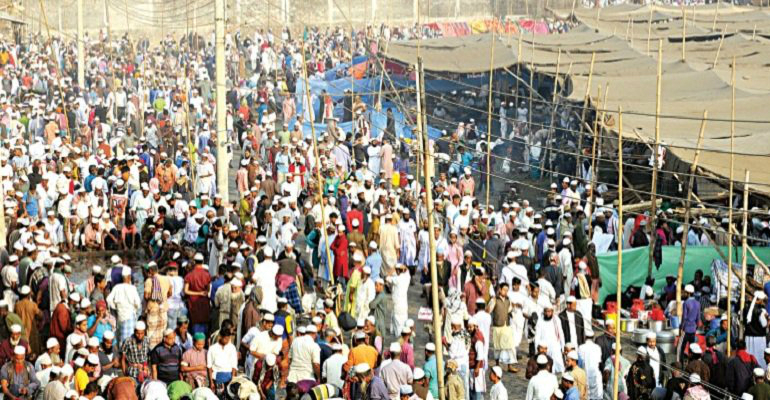 Adherent to group: Tableeghee, also known as Tablighi, or T.J.

The da’wah of the Jamaa’ah at-Tableegh is based upon spreading the merits of Islaam to everyone they are able to reach. This entails it’s adherents to give up some of their time to go out and spread and propogate the da’wah keeping well away from political and partisan issues.

It’s members are compelled into going out (khurooj) to give da’wah and mix with the Muslims in their masaajid, houses and businesses and give words of advice and encourage them to come out with them to give da’wah.

They advise that no members should get themselves involved in any quarrels with the Muslims or the government.

Initially, he sought knowledge in this village, then later travelled to Delhi where he completed his studies at the Madrasah Deoband which is amongst the biggest Hanafee schools in the Indian sub-continent, which was setup in the year 1283 A.H. (1867 C.E.).

He also sought knowledge under the guardianship of his older brother, Shaykh Muhammad Yahya, who was a teacher at the Madrasah Mathaahir al-‘Uloom in Sahaaranfoor.

He later renewed his bay’ah (oath of allegiance) to Shaykh Khaleel Ahmad as-Sahaaranfooree who was one of the scholars of the Deobandiyyah group.

– Shaykh ‘Abdur-Raheem Shaah ad-Deobandee at-Tableeghee spent alot of time in organising the affaris of the Jamaa’ah at-Tableegh along with Muhammad Ilyaas and his son Shaykh Muhammad Yoosuf after him.

– Shaykh Ihtishaam al-Hasan al-Kaandahlawee married the sister of Muhammad Ilyaas, and spent a long time commanding the Jamaa’ah at-Tableegh whilst in the companionship of Shaykh Muhammad Ilyaas, its founder.

The founder stipulated six maxims which he established as the fundamentals of his da’wah, with all members taking care to memorise them and propogate them in their da’wah efforts:

6) al-Khurooj fee sabeel-Allaah (going out in the path of Allaah).

Their manner of propogating their da’wah is as follows:

A group from amongst them is designated to go to a particular area/town/country, whereby each member of the goup takes with them basic means upon which to sleep and other basic items which shall suffice.

When they arrive at their destination, they organise themselves in a manner whereby some of them begin cleaning the place where they shall be resting during their stay in the area; Whilst others amongst them will go out to the market places and the like remembering Allaah and calling the people to listen to their talk (bayaan – as they call it).

When the time for the bayaan arrives, they all gather together to listen to it. And after the bayaan has finished, they request members of the gathering to come out with them in the path of Allaah. And after Salaat al-Fajr, they divide the group of people who are present into groups where a group leader is appointed for each group. Then the group leader undertakes the responsibility of teaching his group members Soorah al-Faatihah and other small Soorah’s of the Qur.aan. They continue in this way day in day out.

Before their period of stay is over, they encourage the people of the area to come out with them to spread their da’wah, such that some people volunteer to join them for three days or a week or a month. Each one according to his ability and circumstances, their giving up their time in accordance with the saying of Allaah:

{You are the best of peoples ever raised up for mankind}, [Soorah Aal-‘Imraan, Aayah 110].

And the preferred time for going out is a day in a week, and three days in a month and 40 days in a year and 4 months in a lifetime.

– They refuse invitations to attend social functions made by the people of the area they have settled in for their period of da’wah; their intention being not to busy themselves with anything other than issues of da’wah and remembrance, and that their actions are soley for the sake of Allaah.

– They do not interfere in issues of forbidding the evil, believing they are at the stage of establishing an appropriate climate for Islaamic living, and that if they were to involve themselves in such issues, then this would place obstacles in their way and turn the people away from their da’wah.

– They believe that if they correct their individuals (members) one-by-one then the evil will be automatically eradicated from amongst the masses.

– That going out and propogating their da’wah da’wah to the people helps in nurturing the da’ee and cultivating his actions, such that he feels he is an example for others to follow and that he adheres to that which he is calling the people to.

– They believe that blind following a madhhab is obligatory, and they do not permit ijtihaad, believing that the conditions of a mujtahid (one who is qualified to make ijtihaad) are not present amongst the scholars of this time.

– They have been affected by the ways of the Soofiyyah, whose da’wah is widespread in the Indian sub-continent. For example:

– It is imperative for every member of the Jamaa’ah at-Tableegh to have a Shaykh to whom he makes bay’ah (oath of allegiance) to, and whoever was to die whilst not having made bay’ah, then he has died the death of those in pre-Islaam. And often is the case that the bay’ah takes place in a public gathering so as to encourage all present to do likewise and give them all an impression that they are all in this together as one group. And the same is done amongst the women also.

– Excessive love and respect is shown to the Shaykh to whom bay’ah has been given, as is excessive love shown to the Messenger of Allaah ﷺ, that which often takes them out of the fold of displaying appropriate respect to the Prophet ﷺ.

– Their belief that the way of the Soofiyyah is the closest way to taste the sweetness of eemaan in the heart.

– Their being taught the names of the major personalities of the Soofiyyah such as ‘Abdul-Qaadir al-Jeelaanee, who was born in Jeelaan in 470 A.H., and also as-Sahrooree, and Abu Mansoor al-Maatureedee who died in 332 A.H., and Jalaal ad-Deen ar-Roomee who was born in 604 A.H., who wrote the book al-Mathnawee.

– They have been affected by the way of the Soofiyyah, in particular the Chishtiyyah, the Qaadiriyyah, the Naqshbandiyyah and the Sahroordiyyah in India.

– There are some members who claim to have adopted the thoughts of the Jamaa’ah an-Noor of Turkey.

– Their da’wah is based upon the arousal of interest and intimidation combined, and thereby causing emotive and affective feelings. They have, thereby managed to enlist in the name of eemaan, many who have immersed themselves into sins and desires, and have directed them to worship and remembrance.

– They do not speak about political issues, and discourage their members from getting involved in these problematic issues, criticising those who do get involved. They say that politics is to leave politics.

– They misinterpret the ahaadeeth pertaining to jihaad, claiming it means to go out and give da’wah, this being to such an extent that their members quite possibly have forgotten about the real meaning of jihaad in the path of Allaah.

– They are very lenient when it comes to narrating weak ahaadeeth.

– Their main points of reference appear to be the Qur.aan and the Sunnah, however, in terms of ‘aqeedah, they turn to the understandings of their founding Shaykhs of the Indian sub-continent, and that being the ‘aqeedah of the Maatureediyyah upon the Hanafee madhhab.

– In the Arab lands they make a point of referring to Imaam an-Nawawee’s Riyaadh as-Saaliheen, whereas in non-Arab lands they refer to the Tableeghee Nisaab (Tablighi Nisab) and Hayaah as-Sahaabah (Hayat Al-Sahabah), and this being full of incorrect information and weak ahaadeeth.

Their da’wah began in India, and then spread to Pakistan and Bangladesh, then later spreading to the rest of the Islaamic world, even in Arabia – such that they now have followers in Syria, Jordan, Palestine, Lebanon, Egypt, Sudan, Iraq and Saudi Arabia.

They also have followers in Europe, America, Asia and Africa.

Their worldwide headquarters is in Nizaamuddeen in Delhi, where they administer their da’wah affairs worldwide. Their headquarters in the western world is in Dewsbury, West Yorkshire, UK.