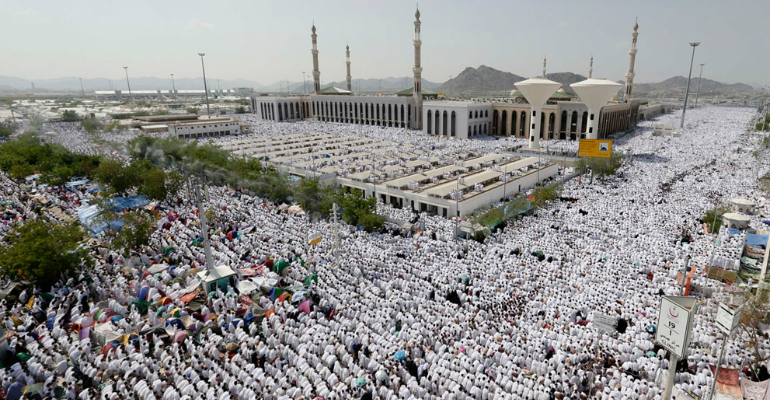 Sheikh Abdul Rahman Al-Sudais, chief of the Presidency of the Two Holy Mosques, urged Muslims of the world to unite their ranks.

Delivering the Haj sermon from Namirah Mosque on Sunday, he exhorted Muslim leaders to shoulder responsibilities and solve problems through dialogue.

“The Muslim Ummah is experiencing difficult conditions which necessitate solidarity and coordination in our stances in order to address our problems and issues,” he said.

He specifically mentioned Palestine and Al-Aqsa Mosque as well as “the tragedies of our Muslim brothers in Syria, Iraq and Yemen.”

Referring to Muslim youth, he called upon them to fear Allah, equip themselves with the weapons of science and knowledge and consult and benefit from Islamic scholars who possess clear learning. They should also reflect tolerance, mercy and the ethics of Islam in their lives, he said.

Addressing Islamic scholars, he called on them to speak rightly and guide the people with the teachings of Allah in a moderate way as Allah said, “And thus we have made you a just community.”

Al-Sudais beseeched Allah to glorify Islam and Muslims, protect Islam, forgive Muslims, guide them to the way of peace, and make them victorious over their enemies.

He called on Islamic preachers to give calls in line with proper approaches based on Islamic teachings and dedication as Allah said, “Invite to the way of your Lord with wisdom and good instruction, and argue with them in the way that is best.”

In a similar manner, he urged the media men and all journalists to be honest in reporting and committed to truth and objectivity and, at the same time, to keep away from incitement, rumors and confusion. He advised Muslims to fear Allah in all matters.

Al-Sudais said Allah had honored man by making him Allah’s deputy on earth; Allah said, “Indeed, I will make upon the earth a successive authority,” and that authority, he said, was based on the promotion of virtue and the prevention of vice.

He said Prophet Muhammad, peace be upon him, had stood in Arafat more than 1,400 years ago and gave a great address in which he laid down the pillars of Islam, demolished the principles of ignorance (“jahiliyyah”) and bid his people farewell upon the completion of Islam for Allah.

Al-Sudais said Islam is very clear in saying that humans are equal in rights and duties and that there is no difference between Arabs and non-Arabs, except in piety.

He said Islam forbade usury and using people’s money unlawfully and mischievously, adding that Islamic solidarity had a prominent position in the Muslim community. Al-Sudais said that Islam had come with a moderate approach based on preserving interests and warding off evils.

He called for combining tradition with modernity.

In a special reference to security personnel, Al-Sudais appreciated their efforts in safeguarding the security of the Two Holy Mosques and their many visitors.

Al-Sudais also called on the pilgrims to abide by regulations and directives set by the authorities concerning grouping and movement between the holy sites in order to avoid any possible harm and, further, to seek tranquility and piety through their words and deeds.