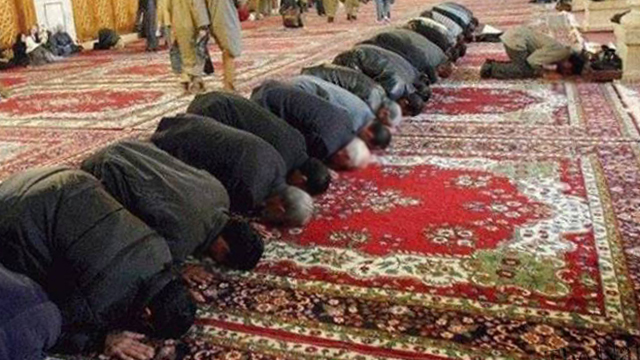 Response: The origin of this issue, lies in his (sal-Allaahu ‘alayhi wa sallam)’s statement:

«When the iqaamah for the prayer is called, there is no [other] prayer other than the prescribed [obligatory prayer]» [from the hadeeth of Abu Hurayrah, as transmitted by Muslim 1/493].

So that which is apparent from this hadeeth is the [voluntary] prayer is rendered void by the mere calling of the iqaamah for the obligatory [prayer].

However, the scholars have differed [over this]: Is this hadeeth absolute [encompassing all scenarios], or is it understood that he can continue in his prayer in some situations and [thereby] complete the sunnah [portion of the prayer] and then join the congregation [in the obligatory prayer]?!!

Based upon what I have read in the book “al-Majmoo'” of an-Nawawee, that which is apparent to me is the [derived] intent from the hadeeth is to encourage the muslim who is praying the voluntary [prayer] to [hasten in] catch[ing] the [obligatory] prayer [in congregation] with the imaam [right] from the beginning; [Such that] he does not miss the initial takbeer [pronounced upon commencing the prayer].

So if the iqaamah call for the prayer was made, and the one praying the voluntary prayer has reached the final tashahhud [stage of his prayer], and all that remains is for him to make the tasleem [to complete the prayer], and [in doing so] he feels certain he will catch the initial takbeer, then in this case he can continue with his [voluntary] prayer, and complete it – even if [at the end] he was to make a single tasleem [to the right].

And in contrast to this scenario, is another [one]; So, for example, if he pronounced the initial takbeer to pray the sunnah [portion] of the fajr [prayer], and at the same time, the imaam pronounced “Allaahu Akbar…” [upon commencing the obligatory portion of the fajr prayer] – and if he was to continue to complete his sunnah prayer, then [by doing so], at the very least, he will miss the initial takbeer with the imaam. So in this case he should [promptly] terminate his prayer, without making the tasleem.

And between these two [aformentioned] scenarios, there are many [others].

So, to conclude: When the iqaamah call for the obligatory prayer has been made, it is befitting for the one who is praying a voluntary prayer to ascertain whether or not if he was to continue to complete his prayer, would he still be able to catch the initial takbeer with the imaam or not?

So if he is certain he will be able to catch [the initial takbeer with the imaam], then he should [continue and] complete his prayer – and [in doing so] lighten it [in terms of its duration]. If however, he was certain he would miss the initial takbeer, then he should terminate his prayer, and join the congregation [in the obligatory prayer with the imaam].